Before I continue the story of America’s involvement in (and transformation of) The Republic of South Korea, I thought it might be in order to remind you of what we have done thus far on our Around the World in 80 Days journey and why we are doing it. I will make this brief because the next three pieces we have lined-up for you on South Korea, titled “Band of Brothers are long and emotionally powerful narratives. Each installment reflects a lot of research, and the ultimate point of the “Band of Brothers” series within the ATW80+ series is, I think, a very important one and a very personal one for me as shall be revealed.

But about the ATW80+ project. Someone just joining us might think: “He’s going around the world in 80 days? Literally? WTH?”

The fact is, it has been much more than 80 days. Avid readers of this blog will know that the narrative is even more complicated than a “simple” 80-day circumnavigation of the earth. A summary might look like this:

* My youngest son, Zachary, and I went around the world in exactly 80 days, hitting 6 of 7 continents and these countries:

*  Then, before I returned to America, with my life looking up and moving forward productively, I was blindsided. This time the car was figurative rather than literal. If I were a worshiper of Allah there would be little reason for hope. But the God of the Bible is of a very different character: “If you, Lord, kept a record of sins, who could stand?” (Psalm 130:3)

* I stepped away from public life for more than a year to pick up the pieces and to rebuild. And I literally set to work building something very special. Lauri and I look forward to revealing it to you at the appropriate time.

* Having recovered our balance, I resumed the around the world initiative earlier this month, adding the “+” to the ATW80 to indicate that it has been much more than 80 days since we started!

In case any of this is not clear, I have diagramed it for you on a bar napkin as I sit here on the far side of the planet: 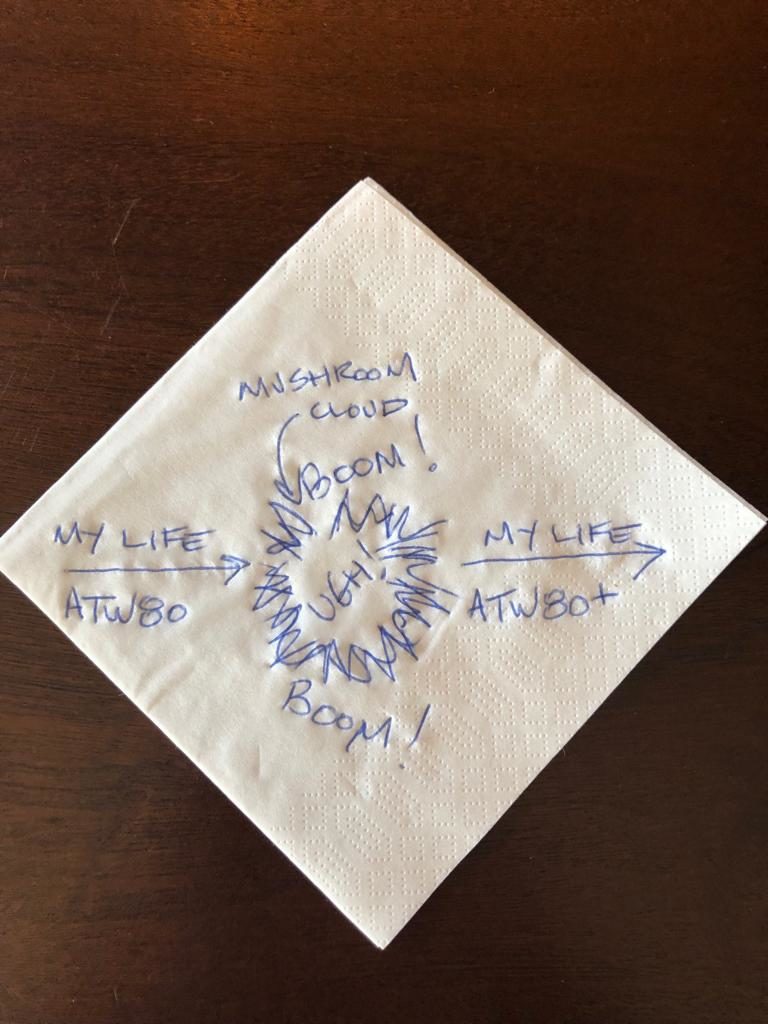 (The bartender graciously supplied me with the napkin and pen. She’s heard a lot of sob stories, I’m sure, but she appreciated the visual nature of this one. She also keeps feeding me the most wonderful cheese that she seems to produce magically.)

So far, on this second circumnavigation I have been to South Korea. But several more countries will follow as we continue our trek. Boy, do I have some stories to tell.

So why do this trip?

When we started this two years ago, I laid out the objectives here.

Incidentally, you can read my latest published articles on my time along the Korean DMZ. One for Fox News and the other for The American Spectator. If you read this blog, the material in both of those pieces will be familiar to you.

Categories: Around The World in 80 DaysATW80+The Full Fathom Five Blog

Watch our, LIVE, video chat session on Zoom. Is the God of the Old Testament a “genocidal” maniac as atheist provocateur Richard Dawkins has alleged? Many think so. The fact is, many Christians don’t know Read more…

https://www.youtube.com/watch?v=eR9x5xCnB8M Watch our first, LIVE, video chat session on Zoom. Listen in as Larry discusses one of the greatest novels ever written and its extraordinary significance for our time. “The Brothers Karamazov”by Fyodor Dostoevsky Larry Read more…

The PC Bullies Attacked Him for What?

New Mississippi head football coach Mike Leach has run afoul of the PC police and he’s taken a beating. He deserves to be defended, and that is part of our mission. Indeed, the Lord has used us Read more…