Larry, still in Vietnam, takes his life into his own hands and tours Saigon on a motor scooter. Did America lose the war? What Larry sees suggests otherwise.

As I said in my previous post, Vietnam is the war we lost.

Upon arrival in Saigon, I decided to schedule a tour to explore the city. I found an individualized tour with transportation included.

Local tours are helpful for a variety of reasons, but I like them mostly to get a local perspective. I am, in effect, paying for a conversation with an educated citizen of the country I am visiting. What do they think are the most important features of their city? What are their opinions on the issues of the day? What, if anything, do we have in common?

“I am Anh,” my guide said, introducing herself with an extended hand. She appeared to be about 15. Surely there was some mistake. But she reassured me there was not.

“I am 32.” She smiled broadly. “We [i.e., Asian women] just age better than white women. And we aren’t fat like American women.” Her smile never dimmed.

This response was typical of what you find in Asia: direct and politically incorrect.

“Are you ready?” she asked, and with an exuberance bordering on giddy, she led the way out of the hotel to a street corner where she handed me a helmet while she strapped one on herself.

“Uh, what’s this for?” I asked anxiously.

“It’s for this,” she gestured at a scooter. “That’s how we will get around the city today.”

I had somehow missed this in the tour information. I looked around for my own scooter. There wasn’t one. She got on the little two-wheeled deathtrap and sat forward and looked at me expectantly.

“Get on!” she said, revving the chainsaw-sized engine.

Anh couldn’t have been more than five feet tall or have weighed more than 90 pounds. I protested.

“Anh, I’m quite a lot bigger than you. Are you sure you can handle having me on the back of this thing?”

“Of course. It is way of life in Vietnam.”

This much I knew to be true. Vietnam, a country of roughly 95 million people, has no less than 45 million registered motorbikes. Saigon alone has about 7.5 million of them. They are everywhere, weaving in and out of traffic, hopping curbs, on sidewalks—everywhere. You will see as many as five passengers piled onto these small machines. You will even see mothers holding infants on the back while dad drives. 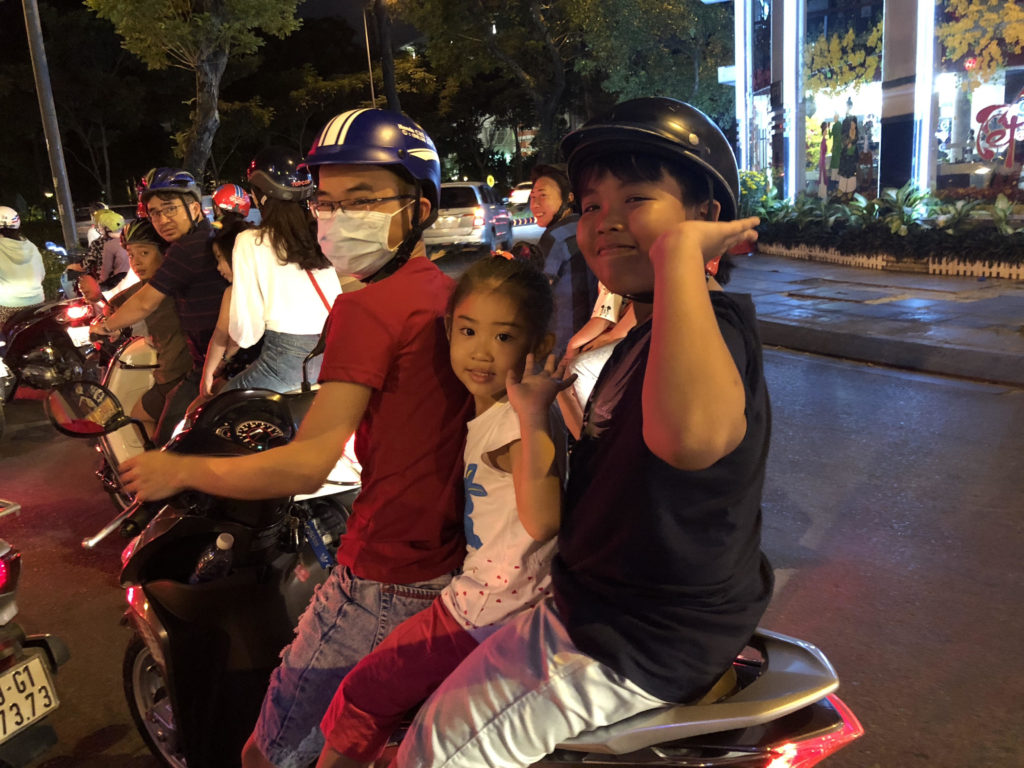 Scooters dominate the streets of Saigon 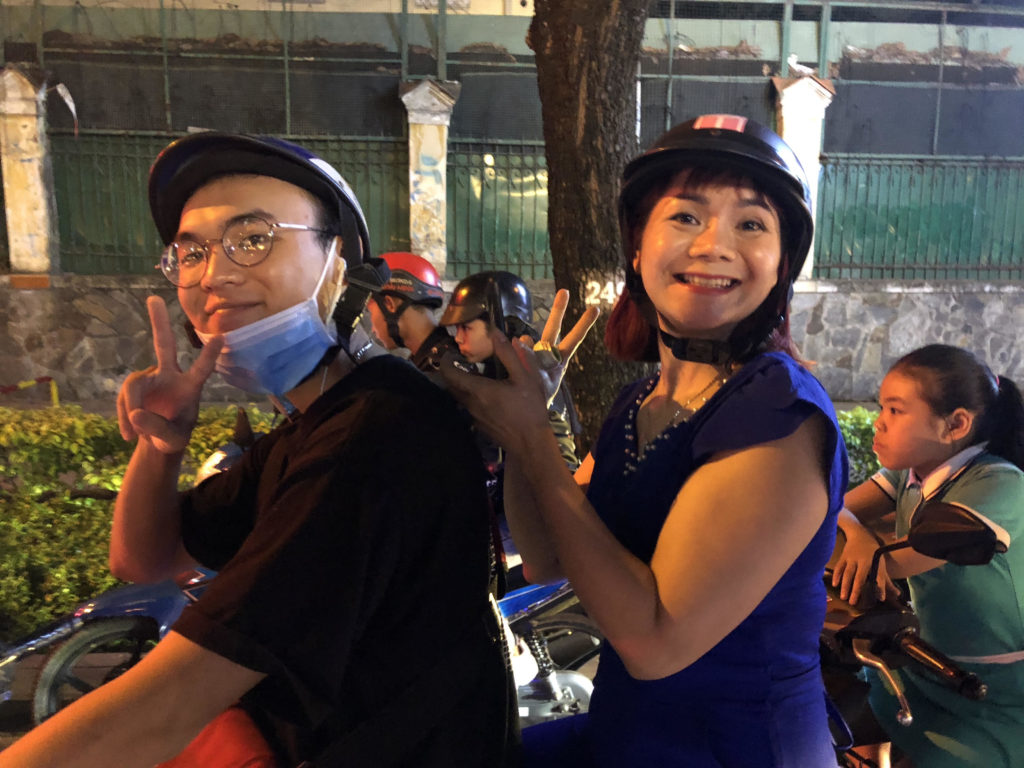 After I took this photo I said, “You’re a handsome couple.”  With a somewhat depressed note, the young man replied in perfect English: “That’s my mom.”

I played my trump card. Or so I thought. “The helmet doesn’t fit.”

Unhappily, I got on the back, and my Benjamin-Button-of-a-guide quickly accelerated to about 35 miles per hour. Other scooters swarmed around us as we joined the chaos. Scooters and mopeds populate the world’s roads in all but America. But the only other place where I had seen them driven with this kind of reckless abandon was in Africa and India. Safety simply isn’t a chief consideration. Helmetless and uneasy, I was certain this was going to end in an accident similar to the one I suffered a few years ago.

Tourists and expats will talk of “blending in.” It is a futile endeavor in the best of circumstances, but this was comedic. Tall, gray-haired, and manifestly non-Asian, the sight of my large frame on the back of that scooter drew attention. People pointed and laughed. The owner of many motorcycles, I confess that I have long regarded scooters as … unmanly. To me, they are like manicures, bow ties, and any movie on Lifetime. But riding on the back of one? Well, that’s like having to suffer all three at once.

“Ahn,” I shouted over the wind and sewing machine-like sound of the engine, “How ‘bout you let me do the driving?”

“Americans cannot drive in this country! It very crazy!”

“I think I can handle it!” I bellowed. “I think you’ll feel safe!” This was clearly not true. No one could possibly feel safe on these roads, but I was desperate. If I was going to become yet another American casualty in ‘Nam, it would be at my own hand.

Reluctantly, she stopped at a traffic light and we quickly swapped places. When the light turned green, it was like the release of the starting gate at the Kentucky Derby. Motorist acceleration was immediate and their proximity to one another was never at a safe distance. I was in my element.

Leaning forward to my ear, Anh laughingly yelled, “You sure you American and no Vietnamese? You drive like Vietnamese!” For the rest of the day this was how we saw the city.

On April 25, 1975, a mere five days before the fall of Saigon and the withdrawal of U.S. forces from Vietnam, the chief negotiator for the United States, Colonel Harry Summers, had this famous exchange with his North Vietnamese counterpart, Colonel Tu:

Summers: “You know you never defeated us on the battlefield.”

Tu: “That may be so. But it is also irrelevant.”

Touring this country some forty-four years later, I am inclined to imagine the conversation differently:

Tu: “You know we drove you out of Vietnam.”

Summers: “That may be so. But it is also irrelevant.” 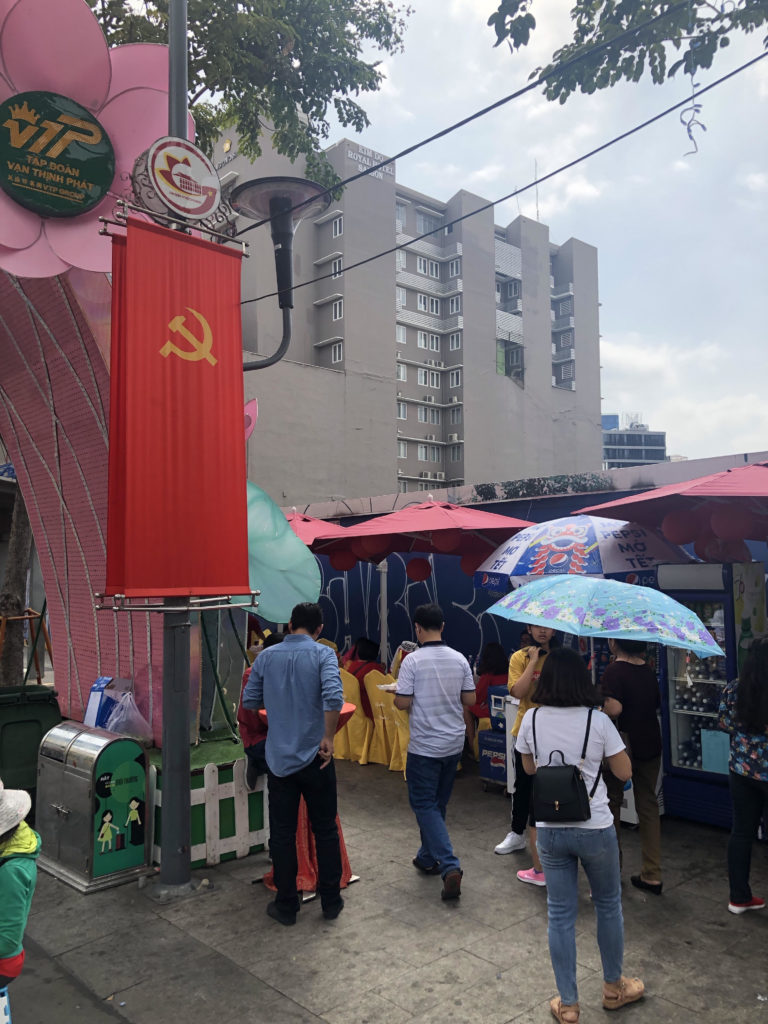 A largely meaningless symbol: Communist banners in the midst of a capitalistic economy 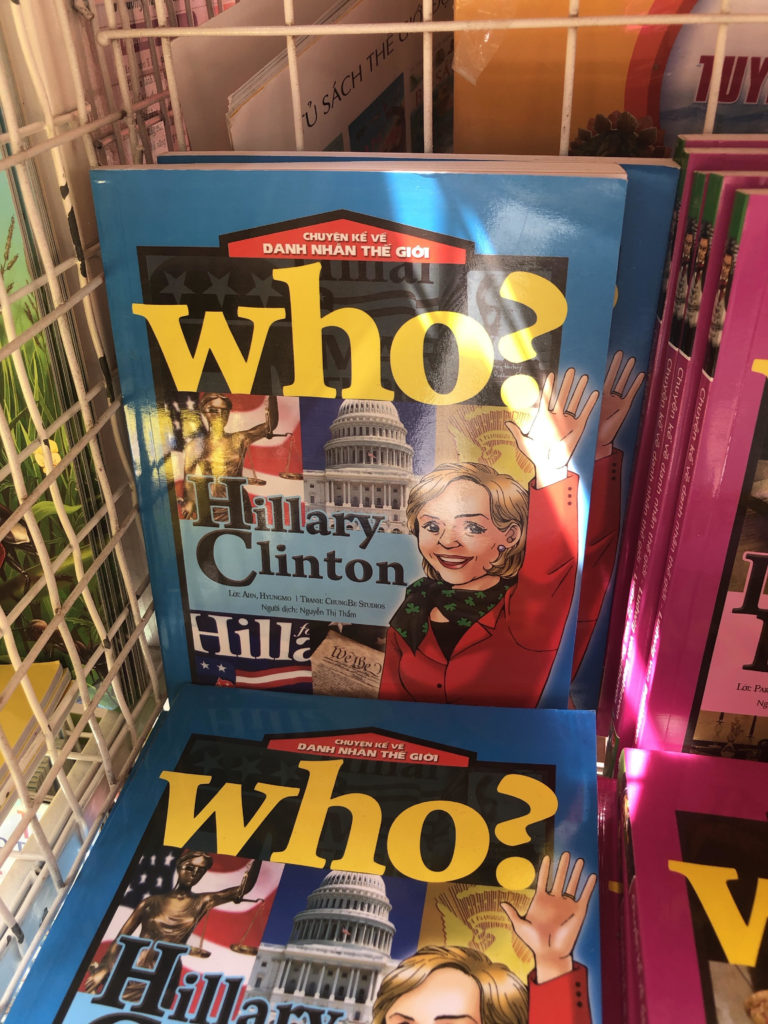 Why do I imagine it differently? Simply put, because the communists have lost. To be sure, the icons and symbols of communism are everywhere. Communist banners—a yellow hammer and sickle on a field of red—line the road and images of “Uncle Ho” are omnipresent. But it very soon became evident that this was as meaningless as a Brexit “leave” vote. The signs of communism’s retreat were everywhere: Chanel, Levi’s, Tumi, Under Armour, Adidas, Apple, Gucci, Starbuck’s—there was even a factory outlet mall. Vietnam is following China’s model: abandon Marxist economics while pretending not to have done so. (The pretending is just a face-saving measure, and saving face is very important in Asia.)

But don’t be fooled. While America’s economic triumph is as obvious as the McDonald’s golden arches I scootered past, total victory is not yet an accomplished fact. Yes, Vietnam has ditched the economics of socialism and has adopted a Western-style free market economy, but they still maintain the one-party, authoritarian system. This, too, is the Chinese model. Vietnam is not a free society as we understand it in the West, so be careful if you travel there because civil liberties, due process, and the rule of law are lines that move according to the whims of the state.

Even so, America is winning. Indeed, American movies, TV shows, music, fashion, products, and retail stores have done what the armies of France did not do, and the armies of the United States were not permitted to do.

Vietnam is following China’s model: abandon Marxist economics while pretending not to have done so. (The pretending is just a face-saving measure, and saving face is very important in Asia.)

Harley-Davidsons, however, that most American means of manly transportation, well, those haven’t yet caught on in Vietnam.

“I really think you a Vietnamese!” Ahn declared with every intention of complimenting me.

For my own part, I revved the tiny engine of our scooter in what was meant to be a powerful growl of acknowledgment. But the whirrrr! of the motor just added to the indignity. I might as well have been revving an eggbeater.

With wounded pride, we rode ingloriously into the formerly communist night.

A  walk through the backstreets of Saigon
Larry Alex Taunton is an author, cultural commentator, and freelance columnist contributing to USA TODAY, Fox News, First Things, The Atlantic, CNN, and The American Spectator.  In addition to being a frequent radio and television guest, he is also the author of The Grace Effect and The Gospel Coalition Arts and Culture Book of the Year, The Faith of Christopher Hitchens. You can subscribe to his blog at larryalextaunton.com.
Categories: ArchiveAround The World in 80 DaysATW80+The Full Fathom Five Blog