Around the World in 80 Days: Thailand A Visit to The Bridge on the River Kwai

My first night in Bangkok had been epic for all the wrong reasons.  Thailand has a reputation for the very thing I encountered on that sweltering night.  But you can’t judge a country on a singular experience.  If Thailand is known for its sex industry, it is also known as the “Land of Smiling Faces,” and right now, I felt like I needed to see some smiling faces.  Unfortunately, I had planned an excursion from Bangkok of an altogether different nature.  The very name of where I was headed was depressing: the Thai-Burma Railway, otherwise known as “The Railway of Death.”  Negotiating a ride on a taxi, I set out for Kanchanaburi, a town two hours west of Bangkok and the site of the famed Kwai River Bridge.

Most of my readers have, I am sure, seen the film starring Alec Guinness and William Holden. The two play soldiers in a Japanese POW camp. Guinness is the half-crazed Colonel Nicholson, a British Army officer who is determined to assist the Japanese in building a bridge over the Kwai River to demonstrate British engineering and know-how. Holden, the handsome, insubordinate American smart aleck, is determined to stop him. The film won seven Academy Awards and has taken its place alongside other films based on real history.

Only it isn’t real history. Very few films marketed as authentic depictions of historical events—Bonnie & Clyde, Braveheart, Titanic, A Beautiful Mind, to name only a few—are authentic depictions of historical events. Most are mutilations of history. In the case of The Bridge on the River Kwai, the bridge wasn’t destroyed by a team of commandos and it didn’t even cross the River Kwai. But this much the film gets right: Japanese brutality in building the Bangkok to Rangoon (now known as Yangon) railway. It is estimated that some 200,000 Asian civilians and 60,000 Allied POWs were used as slave laborers in the building of the railway, and of these, as many as a third died from starvation, overwork, disease, or at the hands of their Japanese captors.

At Kanchanaburi, I found the bridge spanning a river about the width of the Thames and just as murky. In fact, the prisoners built two bridges, one of wood and one of  steel. The former was a temporary structure while the latter is still very much in use. Tourists milled about, snapped selfies, and, a phenomenon common to Asia, women struck sexy poses for the camera of a friend or lover. This is baffling to me. On a beach, a cruise, or atop KL Tower? That I understand. But at a site of such a historic tragedy? No, I don’t get that. I have seen this in places of unspeakable horror. I hope it is because they really just don’t know better. 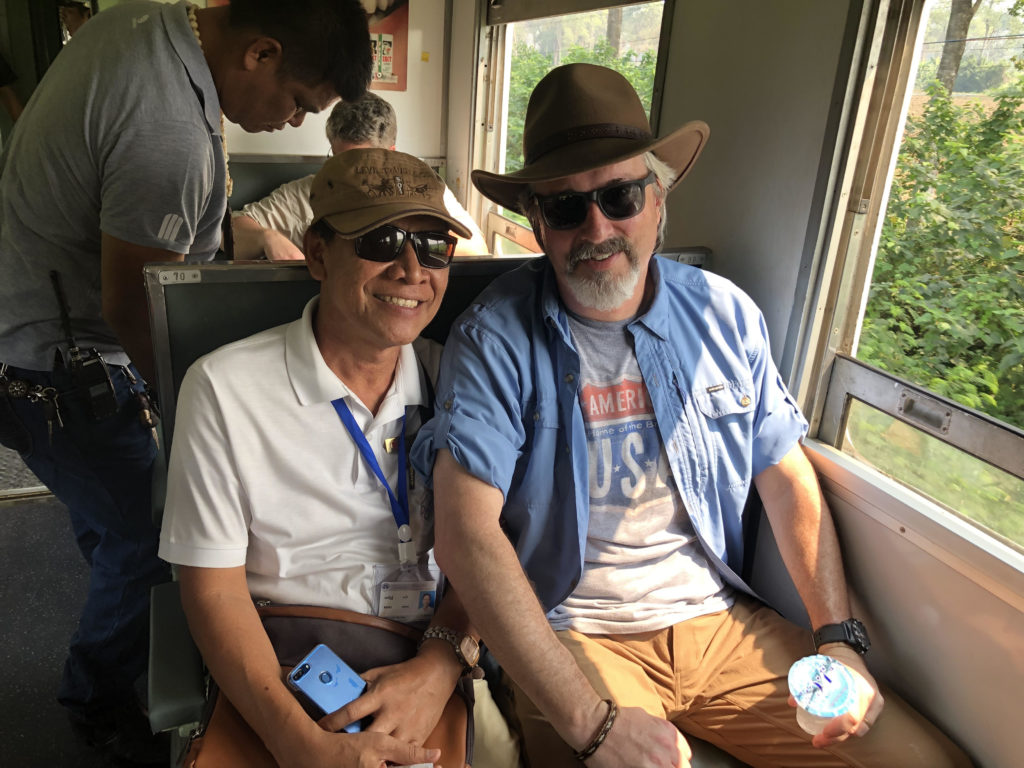 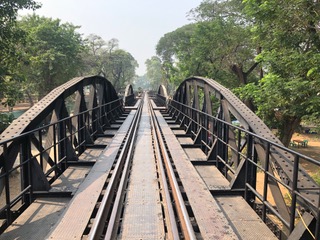 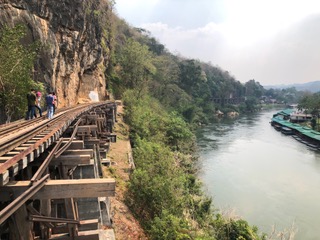 I boarded the Railway of Death and headed northeast toward the Myanmar (formerly Burma) border. The train was crowded with mostly Thais commuting to and from Kanchanaburi. It’s an old train and equipped accordingly but not uncomfortably. The weather was hot, and the windows were down. That combined with the rhythmic clickety-clack of the train had a sedating effect. I looked out of the window dreamily as the countryside, beautiful and exotic to the Western eye, rolled passed. Paddies spread out across the plain and gumdrop mountains, hills really, perforated the horizon. I was intermittently nudged by someone trying to sell me something: a drink, a postcard, a lottery ticket. I just shook my head and pulled my hat down over my eyes.

More than 9,000 Allied POWs are buried in two cemeteries Kanchanaburi.  This is one of them.

At Tham Kra Sae, we got off and poked about, looking at the souvenir kiosks and the wooden trestle bridge before getting lunch along the river. It was all so civilized. In his war memoir Goodbye, Darkness, author William Manchester relates how, in the 1970s, he returned to the Pacific Islands where he fought as a U.S. Marine during the Second World War. These were places of torment for him and his fellow soldiers. Upon arrival in New Guinea, however, he was jarred to discover it had become a haven for wealthy vacationers. There were resorts, golf courses, and guided hikes into the jungles that had swallowed so many Americans and Japanese. A ride on the Railway of Death is similarly incongruous if you know anything of what happened in the building of it. There were no resorts or golf courses, but there was that same unreality to it all. 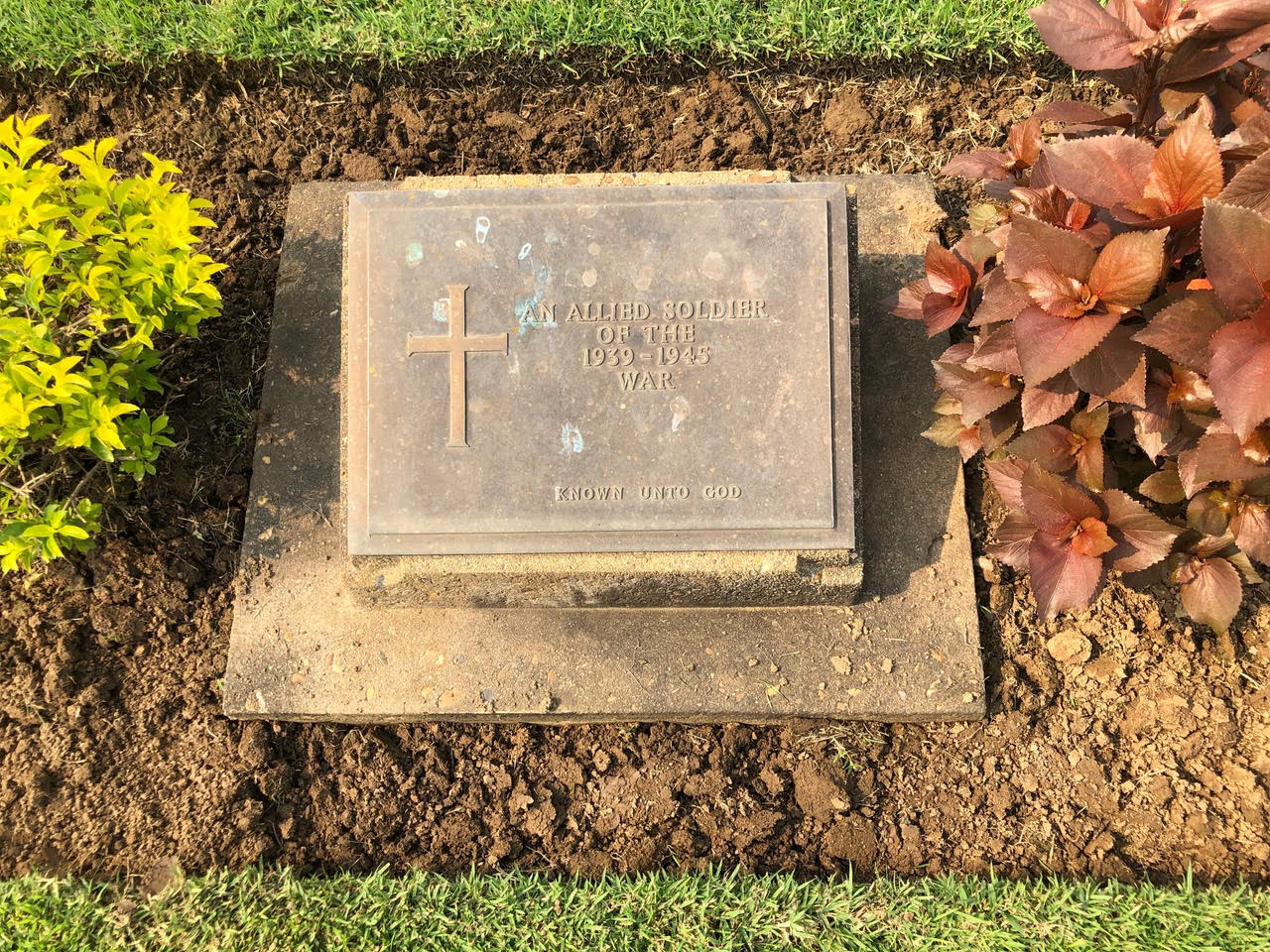 I found this inscription moving 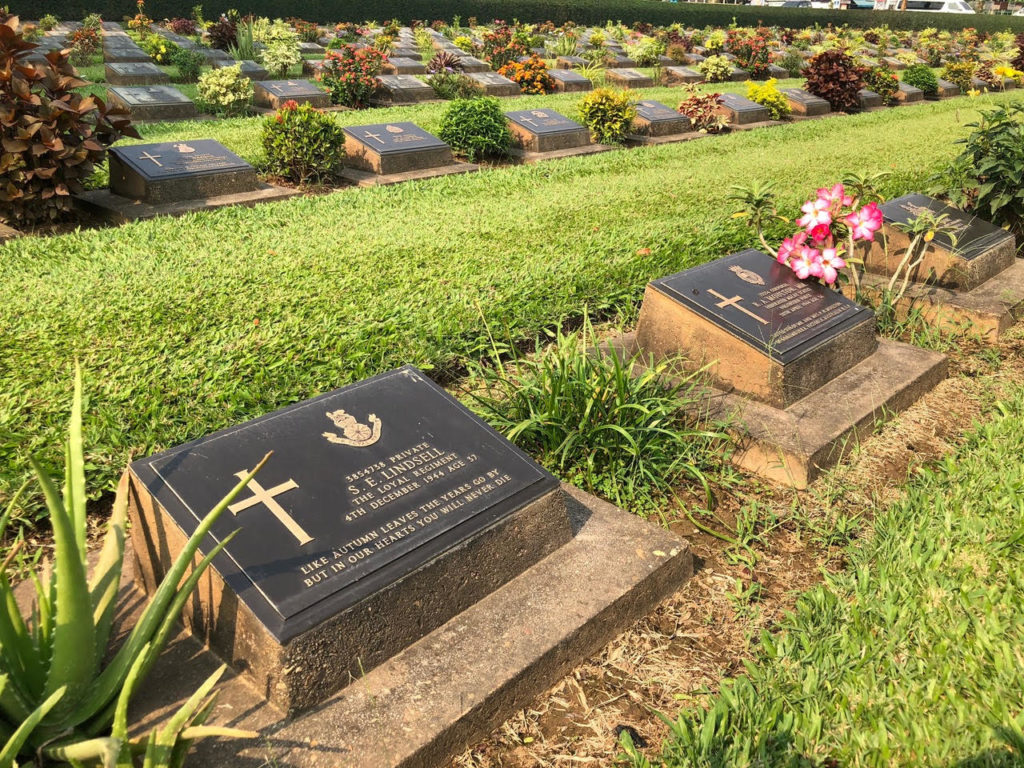 Back at Kanchanaburi, we found the two cemeteries where more than 9,000 Allied dead are interred. Their manicured lawns rival those of the American cemetery at Normandy. Looking at graves randomly I soon lost track of time. These were mostly British, Australian, and Dutch boys—and I do mean boys. They had died building the railway. Some nameplates had no name at all, but instead the inscription: “KNOWN UNTO GOD.” I tried to imagine the pain of those parents at home who received the dreaded knock at the door and the impersonal telegram informing them that their son was missing in action or had perished in the fighting. But then to be here and to have some glimpse of what those who died suffered, it was too much. You would want the Japanese perpetrators dead. No, you would want them to suffer. 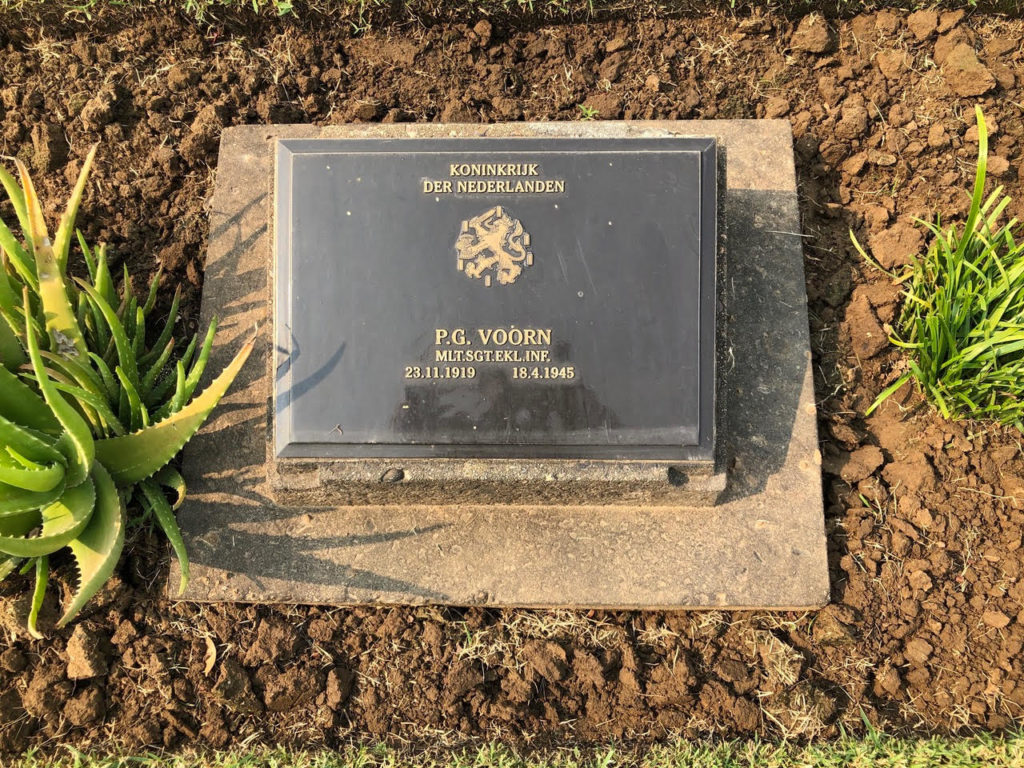 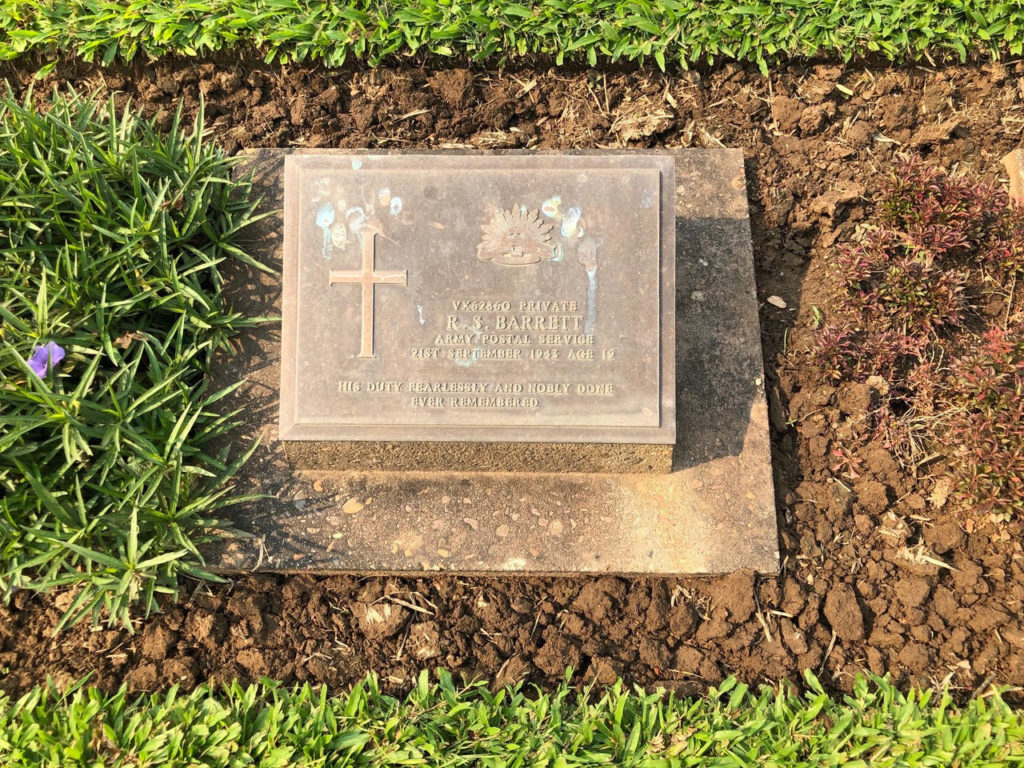 The museum to the fallen, while informative, is in a pathetic state of repair. This is true of so many similar monuments and museums worldwide. France’s World War I memorials, for example, found in just about every French village, hamlet, and city, are falling apart or covered in moss and rust. It seems that the immediate families of the deceased built them and maintained them, but by the time we get to the grandchildren, no one really cares anymore.  My, how the dead are so quickly forgotten! I am reminded of Carl Sandburg’s poem, Grass. I won’t here relate it, but follow the link and you’ll know what I mean.

Pierre Boulle’s book, though a novel and therefore not meant to be factually correct, nonetheless achieves something of historical importance: he brought attention to those who, without his book, would almost certainly be utterly forgotten. Unfortunately, millions have been utterly forgotten. In my recent 4-part series Band of Brothers, I told you the powerful story of just such a group whose sacrifices have largely gone unrecognized 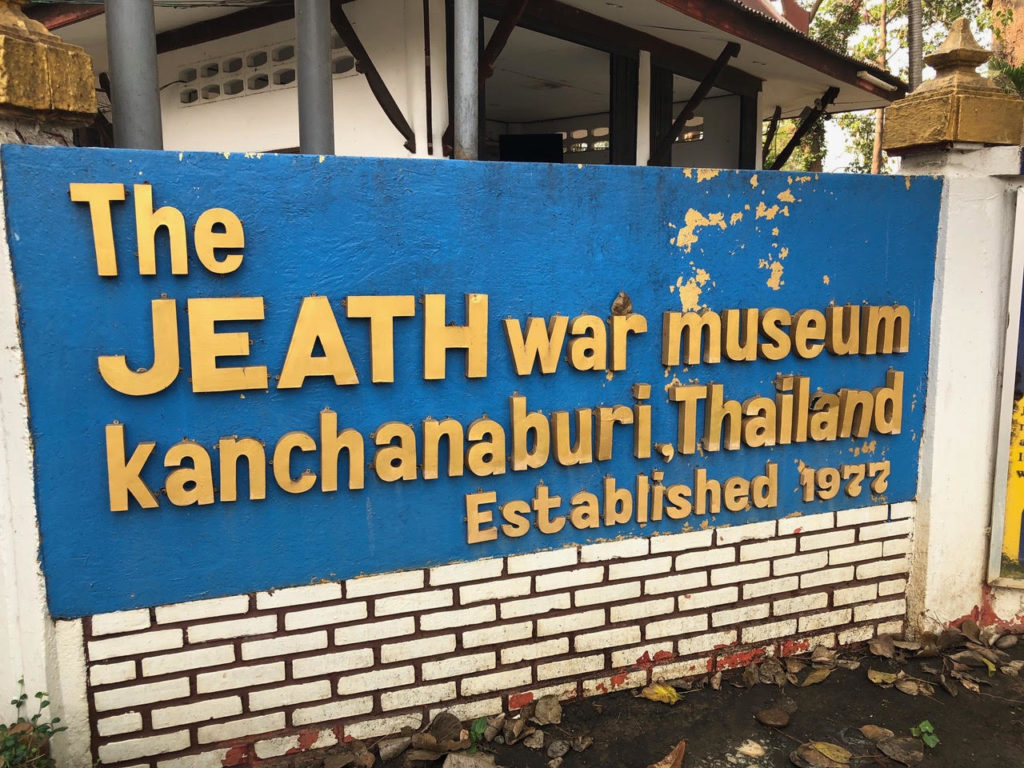 As the weathered sign suggests, the war museum memorializing those who died and suffered at Kanchanaburi is poorly maintained.  It is nonetheless informative. 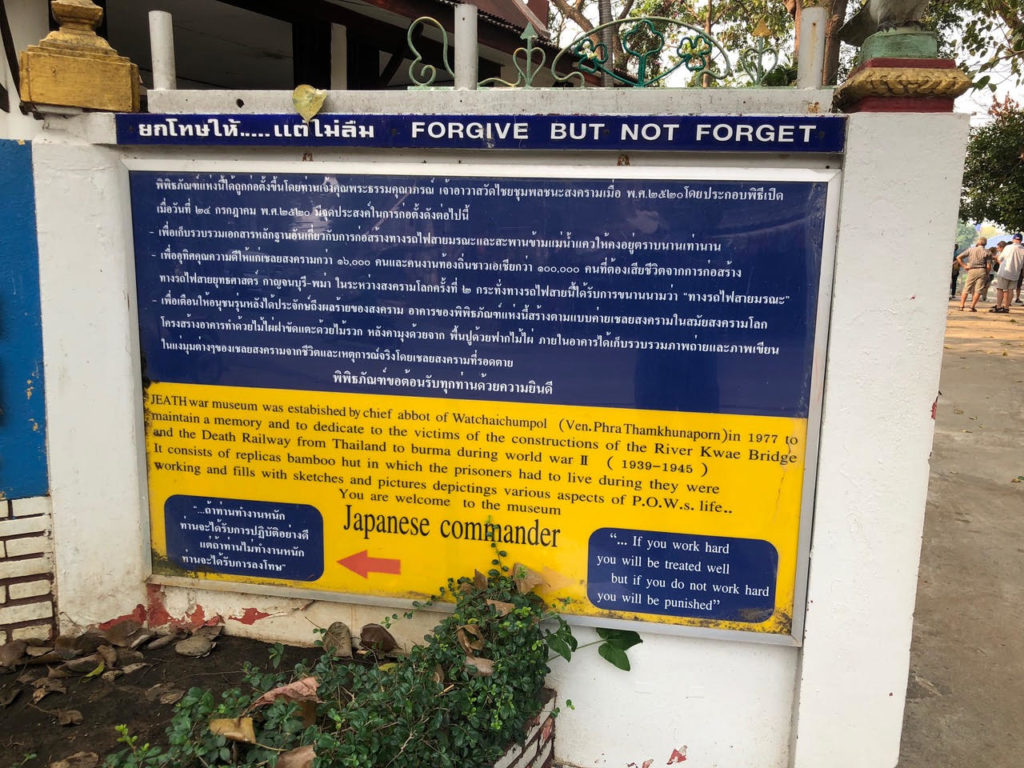 Back at the hotel, I sat down and began to write.  I thought of the bridge, the railway, and the poor young men who died building them.  Involuntarily, a Japanese phrase, a mockery, came to my mind: “Be happy in your work.”  If you haven’t already done so, watch the movie and you’ll know what that means.
Larry Alex Taunton is an author, cultural commentator, and freelance columnist contributing to USA TODAY, Fox News, First Things, The Atlantic, CNN, and The American Spectator.  In addition to being a frequent radio and television guest, he is also the author of The Grace Effect and The Gospel Coalition Arts and Culture Book of the Year, The Faith of Christopher Hitchens. You can subscribe to his blog at larryalextaunton.com.
Categories: Around The World in 80 DaysATW80+The Full Fathom Five Blog

The lead singer of a prominent 70s rock band is crushed when he goes unrecognized. There is a lesson here.