Many of our readers will be familiar with the once popular British television show Top Gear. For more than two decades presenters Jeremy Clarkson, Richard Hammond, and James May have reviewed super cars from all over the world, entertaining their audiences with witty repartee in exotic locations. Each presenter adheres to a character type that is an exaggerated version of himself: Clarkson, the old school, un-PC “dinosaur” who seems irritated with a changing world; Hammond, the youngest of the three, is a man who likes anything that goes fast—especially if it is an American muscle car; and May, the slow-driving intellectual who is more interested in discussions of automotive engineering than of lap times. The show has prospered and so has BBC as a result of the show’s massive popularity.

Then, in 2015, scandal jeopardized this automotive Camelot. During the filming of an episode, Clarkson and a producer had an argument that resulted in Clarkson striking the producer, thus giving him a fat lip. The modern world being what is it, BBC suspended Clarkson and launched a prolonged investigation. As so often happens in these things, Clarkson’s prior sins were dragged out of the closet and gave additional ammunition for BBC to do what it seems they had been longing to do for quite some time: cancel Clarkson’s contract.

BBC quickly reassured fans of the show—the most profitable in the BBC line-up—that Top Gear would continue without Clarkson. BBC said they planned to make Hammond and May the highest paid hosts in BBC history. Friends star Matt Le Blanc was set to join the show and take over for Clarkson. Jeremy Clarkson’s remarkable run on television appeared to be over, ended in a cloud of disgrace.

But that’s not what happened. 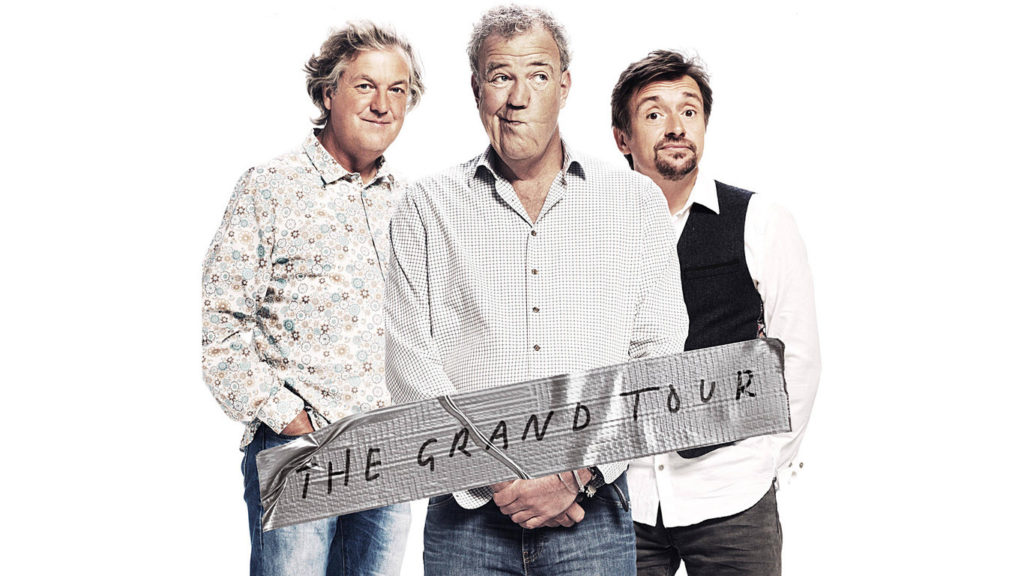 After more than a year out of the public spotlight, Amazon Prime announced a new show that would feature Clarkson—The Grand Tour. The first episode begins on a somber, serious note. Indeed, for a lighthearted show about automobiles, it was quite out of character with anything they had ever done before. It goes like this:

Clarkson is seen exiting BBC’s London offices. He looks like a man who has just lost everything. Downcast, he hands over his identification badge to the security guard, opens an umbrella, and hails a taxi. We next see him at Heathrow Airport. He gets a ticket and boards his flight. The British Airways plane takes off and disappears into the dismal gray mist. It is a depressing sequence.

But we are given visual clues that this is not the way the story will end. The plane lands in a sunny locale that we soon discover is Los Angeles. Still looking a bit dispirited, he walks, mopes really, to the rental car parking garage and clicks a key fob in an effort to locate the unknown automobile. We hear a chirp and lights flash. He stops and stands in front of a gorgeous blue Ford Mustang GT Galpin Rocket. Opening the door, he settles into the seat and the Mustang growls to life. Gripping the steering wheel, Clarkson sighs deeply. Relief? Regret? We aren’t sure, but we can see that he is, at least, moving on with his life.

They look over at Clarkson and give a reassuring smile that says, “we are with you.”

Putting the GT in gear, he exits the garage, and we begin to hear the faint strains of a pleasant melody. Now on the interstate, Clarkson points the Mustang toward the desert and accelerates on the open road. The camera pans and we see that it is unquestionably a beautiful, cloudless day. The music becomes louder and clearer, and we recognize it as a gospel rendition of a soul classic from the early seventies.

Clarkson’s countenance reflects that of a man who is feeling a bit more optimistic about his life. Looking in his rearview mirror, we see him light up with joy. There are two more Mustang GT’s behind him. They fan out so that one flanks him to the right and the other to his left. We see that the drivers are none other than Richard Hammond and James May. They look over at Clarkson and give a reassuring smile that says, “we are with you.” He looks to his right and left, offers a toothy grin, and waves. The music is now strident and hopeful.

I think I can make it now, the pain is gone,
All of the bad feelings have disappeared.
Here is the rainbow I’ve been prayin’ for,
It’s gonna be a bright (bright), bright (bright)
Sun-Shiny day…

The trio drive into the desert where a throng of enthusiastic fans await their arrival. A band, the source of our musical overlay, belts out the finale with the aid of a gospel choir behind them:

Clarkson, Hammond, and May park the Mustangs and make their way to the stage for the remarkable conclusion to this opening. Clarkson takes the microphone and introduces James May thusly:

May then introduces Richard Hammond:

“Ladies and gentlemen, over here, he’s basically a shaved ape in a shirt, and he’s technically the only one of us never to be fired by anyone. It’s Jeremy Clarkson!”

The crowd goes wild and together the three men smile and wave. 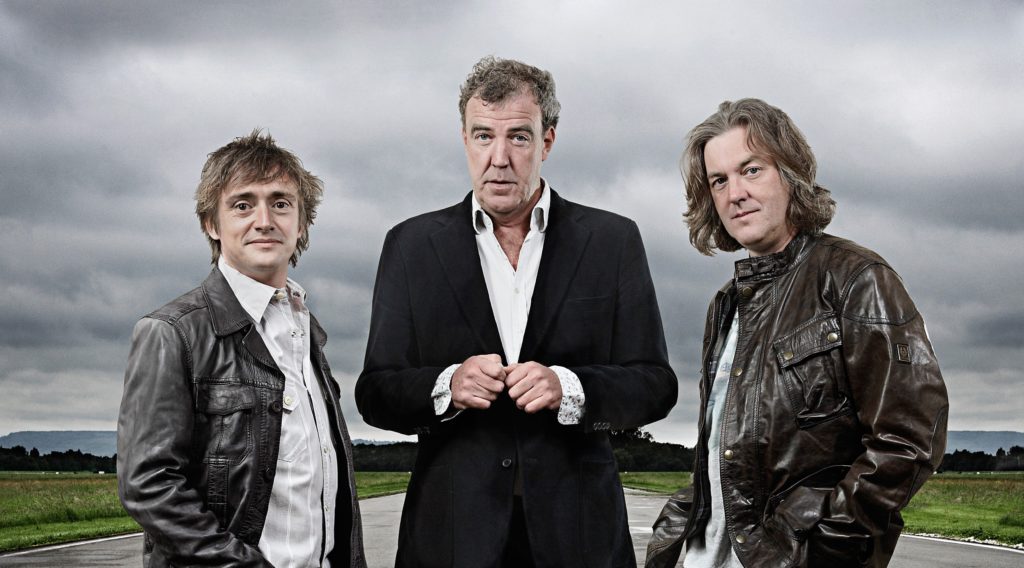 Here was a powerful and unexpectedly moving picture of grace. Whose idea was it for Hammond and May to stand with Clarkson in his first public appearance since his dismissal from BBC and allow their own failures to be recited before a vast public? We aren’t told, and it is irrelevant because the fact is, they clearly agreed to do it. The Grand Tour is now in its third season and it is a smashing success.

Grace is as rare as the most precious of gems. Too frequently it is not exhibited by those who profess to be saved by it. How often are the times that I have heard people say, “Christians are self-righteous.” But that is wrong. The Christian faith is not the source of our self-righteousness. Abortionists, environmentalists, socialists and atheists can exhibit extraordinary self-righteousness. No, Christianity isn’t the source; self-righteousness is part of our fallen natures. As I wrote recently for USA Today, we delight in discovering (or thinking we have discovered) the sins of others. Like the Pharisee who said, “‘God, I thank You that I am not like the other men—swindlers, evildoers, adulterers—or even like this tax collector,” such revelations make us feel spiritually smug. National Enquirer, TMZ, BuzzFeed, People Magazine and similar bottom feeders capitalize on this unseemly aspect of human nature.

At other times, however, grace manifests itself among people who do not acknowledge the source of it. This particular opening of The Grand Tour seems like just such an instance. Perhaps you think Richard Hammond and James May only stayed with Jeremy Clarkson because he was the star of the show and they needed him. It’s possible. But that seems like an unnecessarily cynical reading of the situation. Do recall that Hammond and May walked away from historic salary offers for an uncertain future. As it turned out, The Grand Tour is a massive success and they make more money now than even BBC’s massive offer, but there was no guarantee of that. Or maybe you think this trivializes God’s grace. But it doesn’t. Man was made in the image of God, and no matter how much he may deny it, he will still reflect that image from time to time. Grace is not the exclusive domain of Christians—it is, rather, the exclusive domain of God, and there is a difference. This is also true of love, mercy, and forgiveness. That Christians often deny this fact is damaging to the faith because non-Christians very often see Christians fail to exhibit these qualities to others. If you want to make your faith lovely to others, be a man or woman of grace.

You can watch the opening sequence here. Make sure you watch to the 6:40 minute mark. For those six minutes, these men, in their love and friendship, reflect something of the grace of their Creator. Please send us your stories of grace where you find it!

Larry Alex Taunton is an author, cultural commentator, and freelance columnist contributing to USA TODAY, Fox News, First Things, The Atlantic, CNN, and The American Spectator.  In addition to being a frequent radio and television guest, he is also the author of The Grace Effect and The Gospel Coalition Arts and Culture Book of the Year, The Faith of Christopher Hitchens. You can subscribe to his blog at larryalextaunton.com.
Categories: Grace Where We Find ItThe Full Fathom Five Blog