So far on this circumnavigation of the globe, I have hit South Korea, Vietnam, and Thailand. Now I am back in the Atlanta of Asia: Hong Kong. Yes, you can’t go anywhere in Asia without having to pass through Hong Kong first. In the last few years I almost feel like I have lived here. I think—I can’t be bothered to count—I have been in Hong Kong no less than six times during that period. Maybe I should get an apartment. Probably not. Hong Kong is 昂貴. That’s Chinese for expensive. 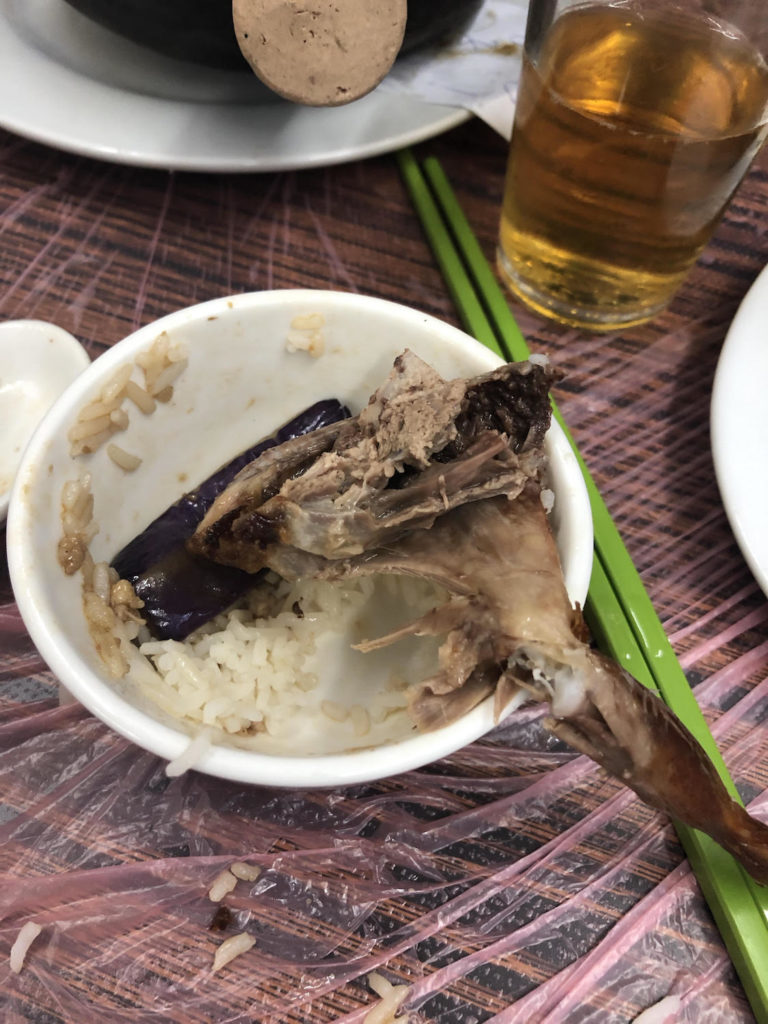 I ate a pigeon. Very popular in China/Hong Kong. Not likely to catch on in America anytime soon.

The name of this city is derived from Cantonese meaning “fragrant harbor.” Perhaps Hong Kong smelled like potpourri when, in 1841, the English first amputated this city of more than 230 islands from China’s Manchu Dynasty. But not now. The fragrance is that of a locker room full of big sweaty men who have spent their afternoon doing Kung Fu. Entering our hotel lobby, you are greeted with an overpowering Old Spice-like aroma that is meant to counter the smell of the city just outside the doors. It is the same everywhere in Hong Kong. Going in and out of buildings is to alternate between the warring scents of air fresheners and the inside of a dumpster, or, as P.J. O’Rourke puts it, between “sh*t and Chanel.” 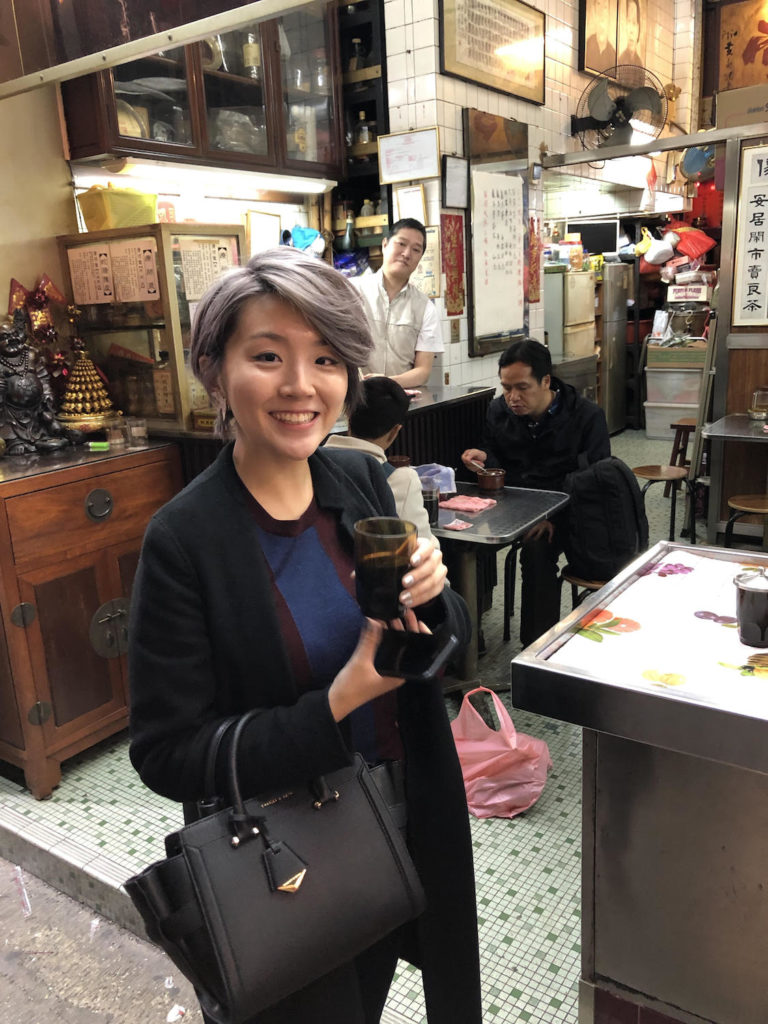 Out for tea. This street tea is potent.

This is all very much in keeping with the city that is Hong Kong. Alternately rich and poor, free and increasingly undemocratic, British and Chinese, Hong Kong is full of contradictions—and it’s more than a little chaotic. A local told me Hong Kong has much in common with Singapore. Having recently been in Singapore, I had to disagree. Both are capitalistic, but, so far as I can see, the comparisons end there. Singapore is beautiful, clean, and orderly. Hong Kong is none of these things. The air pollution alone is enough to kill you. Do a quick Google Image search of Hong Kong. I’ll wait … Got it? Now, here’s how you can tell the real from the fake photos: any that show a crisp, clear skyline are as phony as Kim Kardashian’s, uh, lips. You never get a crisp, clear skyline in Hong Kong. The air pollution hangs over the city as if it were the permanent host to Grateful Dead concerts. So many of this city’s residents wear surgical masks that you’d think it’s full of surgeons. The cab driver, receptionist, waiter—they are all wearing them. You start to feel left out.

The air pollution hangs over the city as if it were the permanent host to Grateful Dead concerts.

The sidewalks serve as a nice metaphor for the chaotic nature of this extraordinary place. Seemingly designed like a malicious Chinese puzzle, they often twist and turn pointlessly or, worse, take you nowhere. Anyone who has walked them knows what I am talking about. Add to them the people, and Hong Kong has a lot of people. This city is 12 times more densely populated than New York, so walking on these sidewalks is a close approximation to running with the bulls in Pamplona, but with old ladies and their pushcarts playing the role of the bulls. Not only are you dodging the veritable human avalanche, you are dodging the water dumped indiscriminately onto pedestrians from the air conditioner condensation tubes that seem to pour and drip from every window of this city—and that’s a lot of windows since Hong Kong has twice the number of skyscrapers as New York. A travel guide says: “Women in Hong Kong carry umbrellas even on sunny days. This is to protect their skin.” Nonsense, I say. Five minutes on these sidewalks and you know precisely why they carry them. 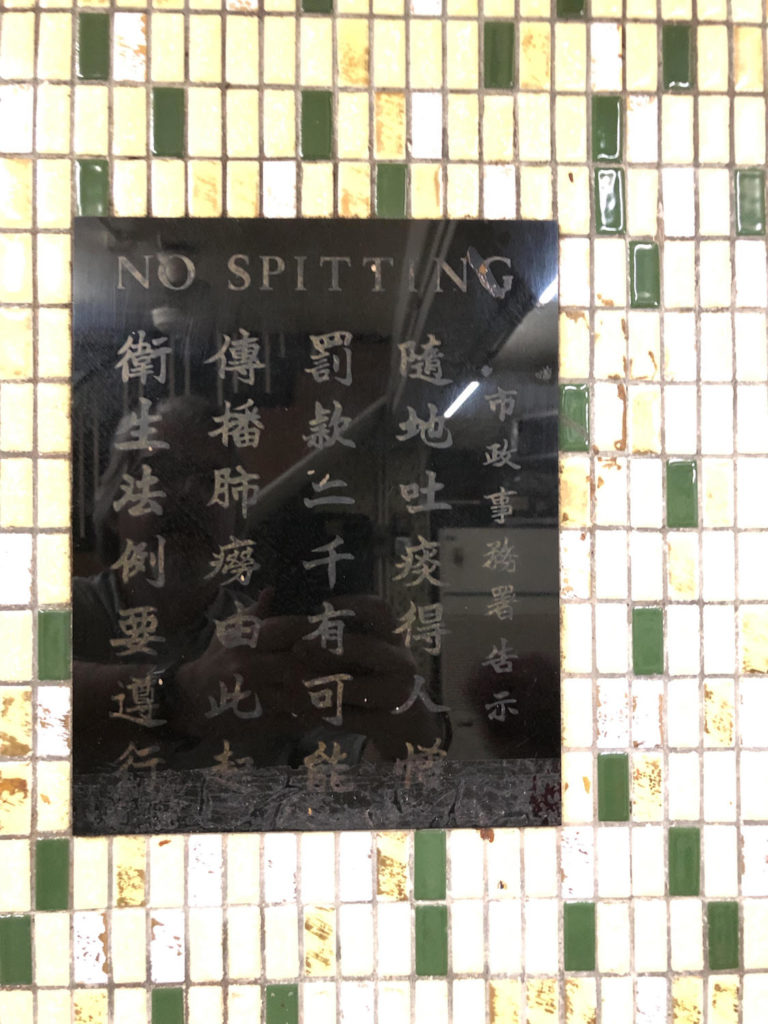 Don’t even think about it!

Then there is the service. The quality of service anywhere in Asia is vastly superior to what you find in Europe, Australia, or the Americas. The norm is prompt, professional, and courteous assistance. People give every impression of taking pride in their work and never convey a sense of surly entitlement. And in contrast to European and American hotels that are often old, Asia’s are usually new and up-to-date right down to the bedside plugs.

NOTE: A bit of advice to would-be world travelers: If possible, pay the extra and stay in top rated hotels with a global presence. It’s worth it. It isn’t about gold gilt mirrors or white gloves; it is about safety and confidence. In doing the kind of work I do, you want to know that after a day in what might be sketchy or even dangerous surroundings, you will come back to find your room has not been ransacked, your computer or passport have not been stolen, and you can get a good shower and food suited to your more fragile American constitution. Good hotels take your safety very seriously. This is because they know that their reputations depend on it. They vet their employees carefully. They don’t let just anyone through the door. They will warn you of potential rip-offs, scams, or parts of town that you should avoid. If you need something, they will get it. If you are in trouble, they will mobilize to help you. They are, in short, your in-country friend. Think of it as an insurance policy. 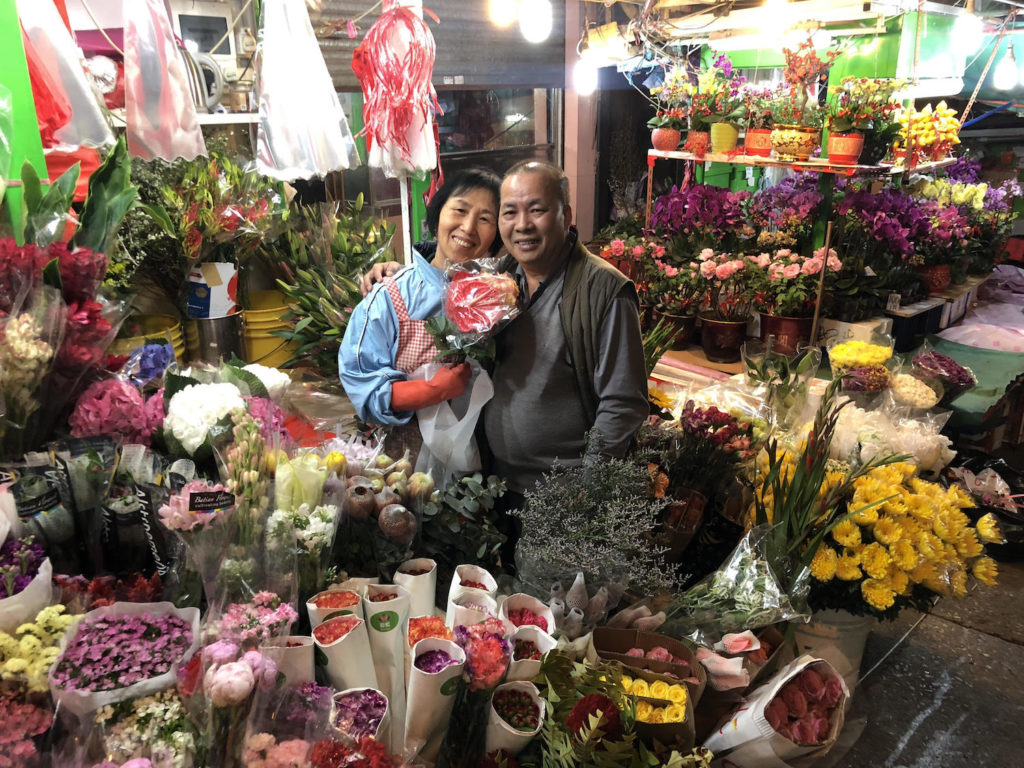 A sweet couple selling flowers on the street.

According to the Wall Street Journal:

Christian institutions have become part of Hong Kong’s civil sensibility. While the protests are specifically for democratic elections in Hong Kong, some see a broader struggle to protect that culture from China’s communist government as it increases its influence on the city. Christianity has been a visible element of the demonstrations, with prayer groups, crosses, and protesters reading Bibles in the street….

The involvement of Protestants and Catholics in Hong Kong’s protest movement is an added concern for Beijing … Protestant pastors based in Hong Kong have helped propagate the evangelical brands of Christianity that have alarmed the Chinese leadership in Beijing with their fast growth.

If the growth of Christianity alarms authorities in Beijing, and it does, then they should be very alarmed indeed. Officially, Christians number roughly 4 percent of China’s population. Unofficially, that figure is as high as 20 percent—because no one believes the government’s figures, not even the government. 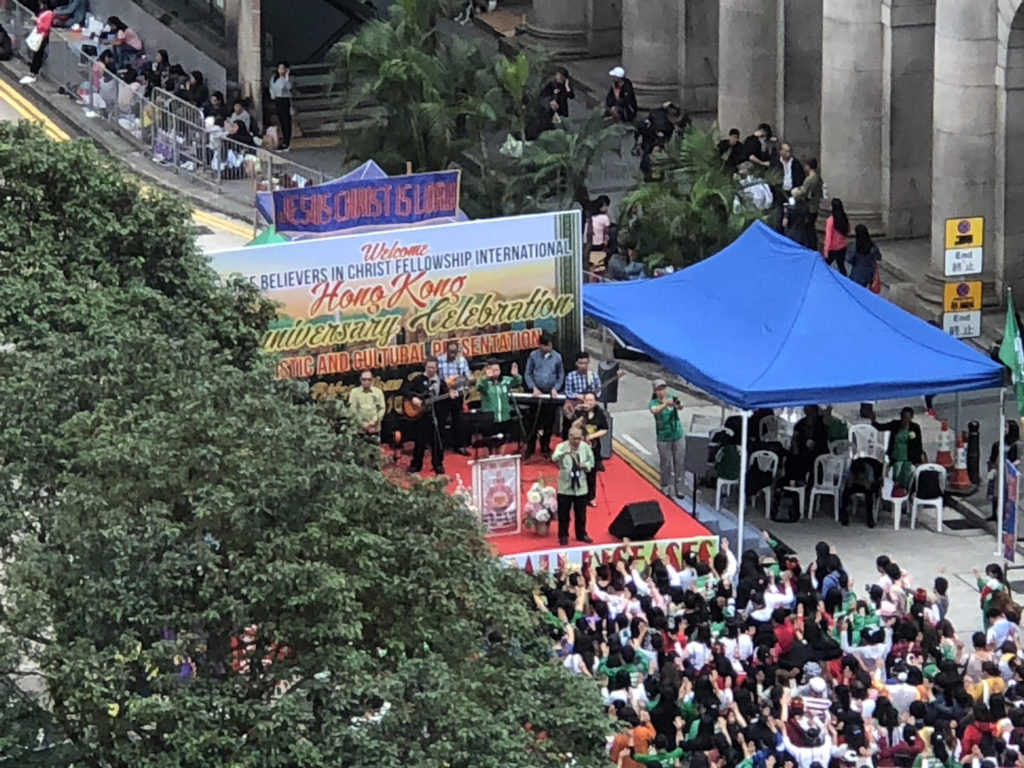 An enormous church service in central Hong Kong. It was an incredible experience interacting with these people and watching them. Their singing filled the streets and their dancing was energetic and celebratory

“It is growing fastest in the provinces,” one government official told me on the condition of anonymity.

“Are you a Christian?” I asked her.

She offered a sly smile. “Yes. And there are many more of us. The government knows the data on our numbers is grossly inaccurate. That is why they are so panicked.”

Grossly inaccurate is right. According to Foreign Policy, China is set to become the largest Christian nation in the world by 2025. And, as we know, a little leaven leavens the whole lump of dough.

According to Foreign Policy, China is set to become the largest Christian nation in the world by 2025.

To put an anecdotal exclamation on this point, one Sunday I was “Ubering” up to Victoria Peak when, at a traffic light, dozens of pedestrians, mostly women, crossed in front of our car.

“Why is this crowd mostly women?” I asked the driver.

“Church. They are coming from church.”

Later that afternoon I went back to this church. Hundreds of people were gathered around the facility, almost all of them Filipina. There are some 170,000 Filipinos in Hong Kong, 140,000 of them being women who are working as domestic servants. Here, on this hot and humid Sunday afternoon, they were singing, drinking tea, eating a quick meal, and enjoying the fellowship of others who shared their faith and their culture. They were waiting their turn to get into an already packed church. So busy is this place of worship on Sundays, that they have ten services. I watched in amazement when, as the umpteenth service ended, hundreds of these women entered one end while hundreds exited from the other orderly and efficiently. It was clearly a well-rehearsed weekly routine. And this was a Catholic Church, a faith that is all but dead in the Western world.

Protestantism, by far the largest Christian element within China, is growing much faster and, because it is decentralized in a way that Catholicism is not, has proved much harder for Beijing to control. Having reached and surpassed critical mass, such efforts are Sisyphean.

On my first visit to Hong Kong, I didn’t like it. It was simply too overwhelming—the noise, the clashing cultures, the sights and sounds, the pollution and water-soaked sidewalks.  As I said, it is chaotic.  But is has grown on me. I like it. No, wrong word. I respect it. 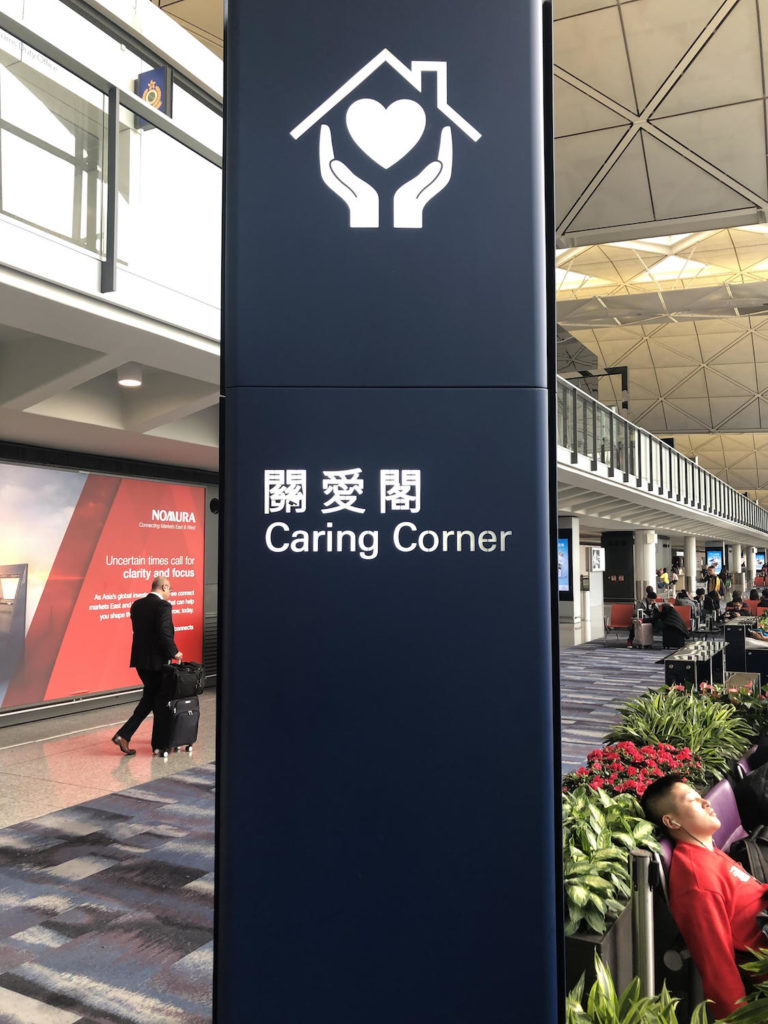 I’ve been in dozens of airports all over the world and I’ve never seen one of these before and don’t know what it is. We stood by the sign and waited patiently for someone to come and give us a hug or something, but, alas, we were disappointed.
Larry Alex Taunton is an author, cultural commentator, and freelance columnist contributing to USA TODAY, Fox News, First Things, The Atlantic, CNN, and The American Spectator.  In addition to being a frequent radio and television guest, he is also the author of The Grace Effect and The Gospel Coalition Arts and Culture Book of the Year, The Faith of Christopher Hitchens. You can subscribe to his blog at larryalextaunton.com.
Categories: Around The World in 80 DaysATW80+The Full Fathom Five Blog 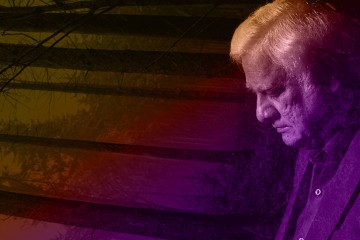 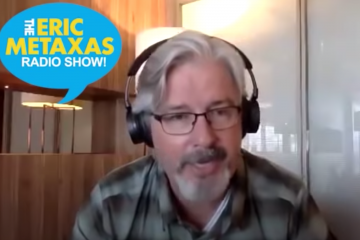 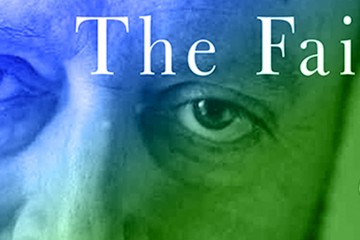