A Prayer Request, the Problem of Suffering, and Jwan Zhumbes vs. Joshua Harris

I write to you from a patient’s room at St. Vincent’s Hospital in Birmingham, Alabama. This time I am not the patient. The patient is Jwan Zhumbes, the Anglican Bishop of Bukuru, Nigeria. Regular readers of this blog will know that I have written about him extensively for Fox News, Daily Caller, The American Spectator, and for this website. They will also know that he has been with us this month for a series of speaking engagements.

I first met Jwan in a doctoral course at Trinity Seminary in Ambridge, Pennsylvania. Following my accident that landed me in the Burn/Trauma Unit at UAB Hospital, Jwan came to see me in Birmingham. There are friends who live in the Birmingham area who didn’t do that, and here he was making the intercontinental journey to express his support and friendship. He invited me to visit his diocese in Jos, Plateau State, central Nigeria to see his work, to speak to his clergy, and to write about their persecution at the hands of the violent Islamic groups Boko Haram and the Fulani Herdsmen Militia. 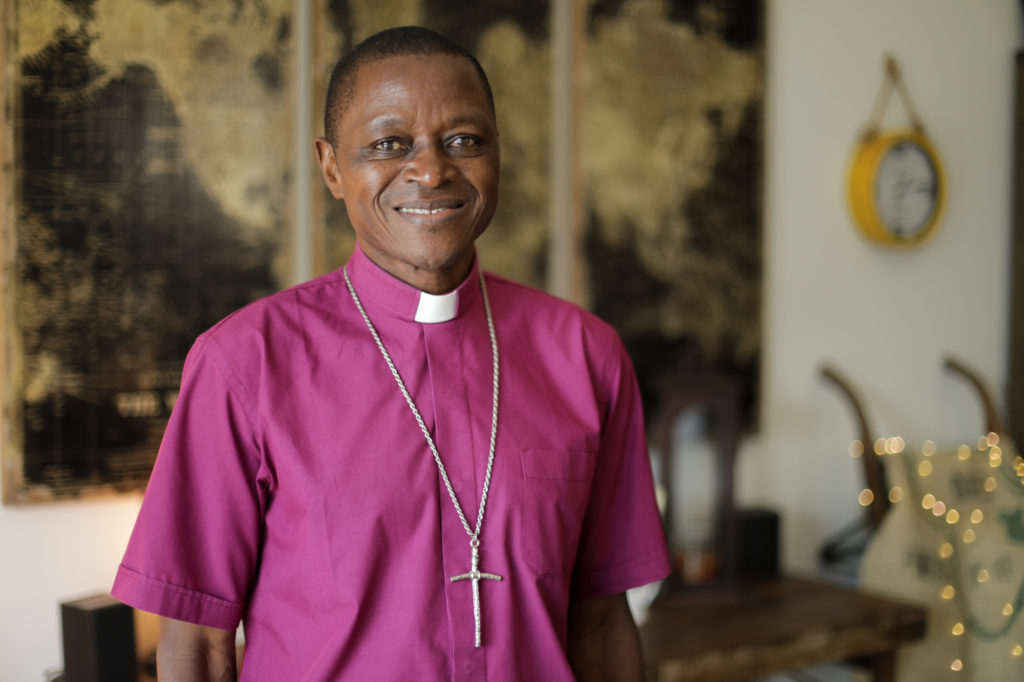 In May 2017, I made the dangerous journey to see him. What I saw and experienced made a deep impression upon me. I will not recount it here, but suffice it to say that I wanted to bring public attention to their circumstances, and so I wrote about it. If, I reasoned, I could elevate Bishop Zhumbes’s profile, I could elevate with him the horrors endured by Christians in Nigeria. This is why Lauri and I founded Fixed Point Foundation in the first place. We aren’t a benevolence ministry like Samaritan’s Purse or a relief organization like World Vision, but we are able to bring some public attention to the Big Ideas and Issues, shape how people think about them, and make many aware of crises like those facing the persecuted people of Nigeria.

To that end, I invited Jwan to visit us at our home in Birmingham and, while on sabbatical with us, to raise awareness about the Persecuted Church in Nigeria. That has been richly blessed. I was able to arrange several speaking engagements for Jwan and his words have challenged and blessed many. Still others have given generously to help him and the people in his diocese.

Jwan arrived in the United States not feeling well. He complained of stomach pain. At first, this did not seem especially serious. Perhaps an antibiotic and a change in diet would do it. On Sunday August 25th, Jwan spoke at Cathedral Church of the Advent in Birmingham, and following that engagement, he started to feel worse. We put out word to the people and physicians in the Fixed Point network, and Jwan was finally seen by a G.I. specialist on Monday. An endoscopy was performed the next day. Following this procedure, the physician called me back to a private room to tell me that my friend had “a massive ulcerated tumor” in his stomach and that his condition was “very, very serious.” 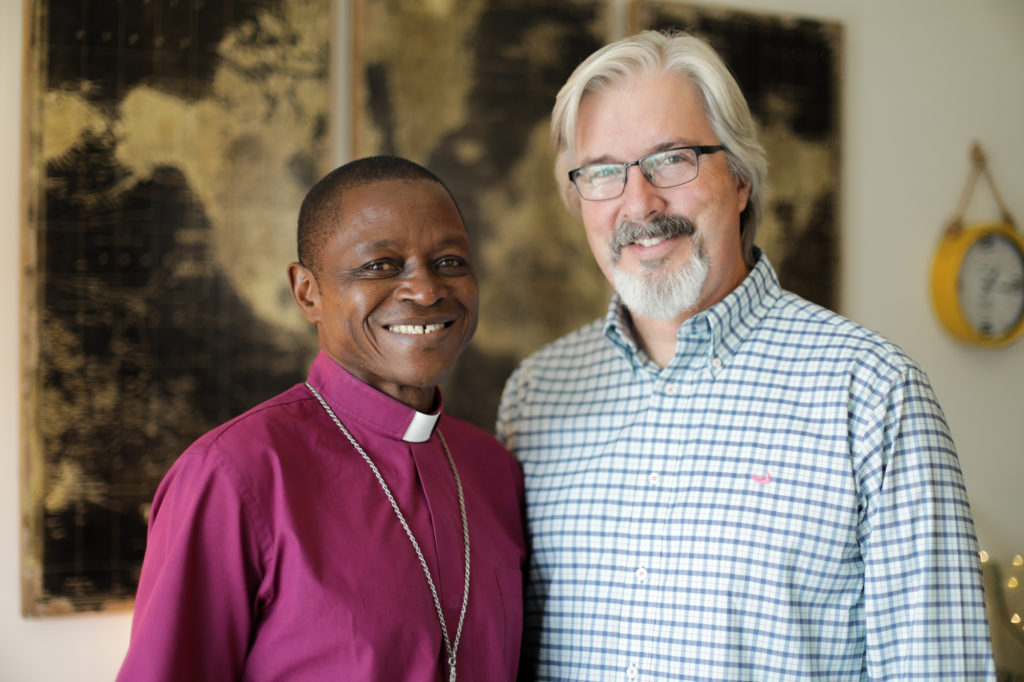 I quickly asked those on our private mailing list to pray for him and to pray for me as I broke this news to him. Here was a man who had lost a child to disease. Lois, his wife of 29 years, died of cancer in April. The day of his own hospitalization, Jwan learned that his brother had suddenly died (to neurocysticercosis, of all things – a tapeworm in his brain). He had survived Islamic terrorism. And now I had the unhappy task of telling him that his condition was potentially fatal. But Jwan took the news as a Christian ought. He didn’t panic. He didn’t sink into despair. And he wasn’t full of self-pity. He put his faith and trust in his Lord and Savior and said:

“It is in the Lord’s hands. If he doesn’t take me now, he will take me later.”

He thanked God that he was in the United States when this happened (he would be dead in a week in Africa), he gave thanks for our friendship, and he expressed concern for his four children.

In the few days since this diagnosis, there has been much for us all to absorb. At present, he is unable to digest anything because the tumor has created a blockage. They believe that it will respond to chemotherapy, so he is scheduled for six treatments at three-week intervals. That’s eighteen weeks of treatment.

Let me say here that St. Vincent’s Hospital has been wonderful. Jwan is without an insurance plan that is acceptable in the United States and, living on less than $80 per month, he has no means of paying the enormous medical bills this level of care necessitates. (One vial of chemotherapy medication can cost as much as $23,000, and some treatments require as many as four, I am told.) Today, St. Vincent’s accepted him into their charity program, so this is a great answer to prayer. In addition to this, the physicians, all Christians familiar with the work of Fixed Point, have agreed to donate their services.

All of this represents what I have called “the grace effect”: that is, when God’s grace transforms our hearts internally, we in turn exhibit that grace to others externally. St. Vincent’s efforts and those of the many physicians in this case are motivated by belief in the gracious God of the Bible. Were Jwan in almost any non-Western nation – and some Western ones – his prospects of survival would be severely reduced by poor healthcare, indifference, or, most probably, both.

I ask for your prayer for Jwan, his family in Nigeria, the medical personnel, and Lauri and me. Jwan was scheduled to return to Nigeria September 6th. It now appears that he will be staying with us in Birmingham for the next four months or more. There is a lot here for us to navigate. Indeed, being at the front end of this process, I am sure there is much that lies ahead of which we are not yet aware. The bishop will need extensive care, treatment, transport to/from his medical appointments, and so on. We need your prayer.

AS A FAITH APPLICATION, I wish to draw your attention to the manner in which Bishop Zhumbes has faced his circumstance with those people who have abandoned the Christian faith due to the problem of suffering – or so they claim. I am thinking of people like professional atheist Michael Shermer, agnostic UNC professor of religion Bart Ehrman, and, more recently, former mega-church pastor Joshua Harris. We may also add to this list Marty Sampson, a longtime Hillsong musician, who hasn’t exactly abandoned his faith, but declares that it is “on shaky ground.”

I generally find that the suffering excuse for desertion is a total fabrication. When Shermer and Ehrman (separately) raised this issue in debate, I asked if either of them had ever really known great suffering. With obvious reluctance, both admitted they had not. As someone who has known great suffering and other great sufferers – and I mean here something that goes well beyond what we might reasonably expect in this life – it is my experience that such people are closer to God. To this the critics say, well, it’s not my suffering but the suffering of other people – “children in the Third World” – that led me to reject God. I don’t believe it. Are these expressions of deep concern and compassion for the suffering of others reflected in the lives of these critics through their own efforts to adopt these children; to give generously to the poor, sick, and elderly; or by risking their lives to go to them and bring them relief?

Not in my experience.

It’s all a ruse, spoken passionately, perhaps even tearfully, but there’s usually no real substance (or self-sacrifice) behind the InstaTwitFace posts and the rants against the god they so foolishly malign. It is often an excuse to justify a life of rebellion against God.

Bishop Zhumbes’s response to his own suffering – the loss of his son, his wife, his brother, and all of the suffering imposed by poverty, persecution, a corrupt government, and now his own cancer – was not to abandon God, but to draw near to him. I find all of the complaining by the well-to-do Western non-sufferers to be nauseating. Yesterday I heard a man on sports radio characterize an NCAA college athlete transfer rule as “barbaric” and “brutal.” All I could think was that this guy needed to get out and see the world.

As I sit here thinking on the topic of suffering, not in some vague theoretical way, but in the real flesh and blood world of death, disease, and my friend who lies before me in a hospital bed, I am reminded of a line from the second volume of Alexander Solzhenitsyn’s The Gulag Archipelago. There this great Russian writer and fellow sufferer wrote:

“The meaning of earthly existence lies not, as we have grown used to thinking, in prospering, but in the development of the soul.”

Apart from God, suffering has no meaning whatsoever. It is just what happens. Too bad. But those who lean into God in their suffering – be it self-inflicted or inflicted by others; emotional or physical; the result of evil or natural phenomena – will find that they have highly developed souls.

NOTE: On the bishop’s behalf, let me say that we are grateful to the ministry of St. Vincent’s Hospital, the many physicians who have seen him at no charge, Cathedral Church of the Advent for reaching out to him and praying for and with him, and the other pastors and priests who have come to see Jwan. I know that it has encouraged him greatly. If you’d like to visit him during his hospital stay, you can email us at contact@larryalextaunton.com.

Larry Alex Taunton is an author, cultural commentator, and freelance columnist contributing to USA TODAY, Fox News, First Things, The Atlantic, CNN, and The American Spectator.  In addition to being a frequent radio and television guest, he is also the author of The Grace  Effect and The Gospel Coalition Arts and Culture Book of the Year, The Faith of Christopher Hitchens. You can subscribe to his blog at larryalextaunton.com.
Categories: The Full Fathom Five Blog
Tags: AlabamaBirminghamChristian persecutiongraceJoshua HarrisLarry Alex TauntonLarry TauntonNigeriaNigerian Bishop ZhumbesPrayer requestProblem of Sufferingresponding to sufferingSt. Vincent’s HospitalSufferingThe Grace Effect”

State Schools and the End of Parental Rights: The Ideological Origins of the Progressive Dream of the State as Father, Mother, & Educator

Incrementally the state is calling for an end to parental rights. This has been done before—with disastrous effect. Read Larry’s latest column.

Finding Freedom in Prison: A Special Report by Chris Taunton

Over a hundred men sat at tables around the room, all wearing the same tan uniforms with the words “Department of Corrections” displayed largely on their backs. The room felt like a rundown school cafeteria Read more…