A Word on Faith and Viruses

I hope this letter finds all of you well and virus-free.

I’d like to say a few words about the coronavirus:

The virus itself, the so-called “pandemic,” the panic it has caused, and our faith in Jesus Christ. I hope it will be helpful to you.

The Situation in Europe

As “Your Man in the Field,” I have been abroad for well over a month. Hence the silence these many weeks. This trip has been a long time coming, but it had to wait until I finished my manuscript for my next book (out this autumn) and had delivered it to my publisher. That accomplished, I have been in the UK, North Africa, continental Europe, North Africa again, and now Spain.

Last week, the Spanish government ordered everyone into self-quarantine. This is enforced rigorously. Police are stopping everyone who is outdoors to grill them on their reason for breaking quarantine—a visit to the grocery store, pharmacy, walking the dog, and, hilariously, buying tobacco or smoking it make the approved list. Dogs have never had it so good! People are borrowing them and even renting them just to have an excuse to get outside! The police drive through the streets using loudspeakers to warn people to stay in or face stiff fines (500 – 3,000 euros). This video, taken from our window, gives you an idea of things here:

A few days ago, the military began moving in. The country is, for all practical purposes, under martial law. Hotels are, inexplicably, expelling all of their guests on Saturday March 21 (tomorrow). As a result, people are scrambling for a place to go. If you can’t fly home, and hotels are no longer an option, what do you do? The solutions are creative!

Frustratingly, American Airlines (AA) has canceled our flights home. This is because international travelers can only fly to one of 13 approved airports in the US for coronavirus testing, and we were scheduled to fly from Madrid to Philly, and Philly is not one of those airports. No biggie. We rerouted through Miami. But now AA is trying to charge us $12,000 for the tickets! They say we changed the route. Of course, we didn’t do any such thing. They canceled the flight and Philly is closed. So, we had to go elsewhere. We won’t book that. If need be, we will stay here. We are merely inconvenienced. We won’t starve and we won’t run out of oxygen. We trust in a sovereign God and we believe he has us where he wants us. So, we are working on getting home while simultaneously trying to find a place to stay.

“Medically/Scientifically this is sheer lunacy. The mortality rate in the US is ~1.5% but this is artificially elevated because we have no idea how many people are actually infected because most cases are mild and never get tested. The true mortality rate will be <1 % when the dust settles. For comparison, The flu has a mortality rate of ~.1% and swine flu between 1-4%. The WHO claimed 18,500 died from swine flu of 2009-2010. 3 years later The Lancet claimed the numbers were 15x higher (~280,000). The truth is no one knows the real numbers because only the really sick get counted and whoever is doing the study ALWAYS has an agenda. Neither I nor any of my family have ever gone to the ER/Doctor when we had the flu (this counts my parents, siblings, etc…). In all likelihood most with the corona virus will never know they have it and certainly will never be tested.”

Here is another, a Stanford Professor, who says exactly the same thing. To my knowledge, these two arrived at the same conclusion separately:

“The current coronavirus disease, Covid-19, has been called a once-in-a-century pandemic. But it may also be a once-in-a-century evidence fiasco,” Ioannidis writes in an opinion piece published by STAT on Tuesday. “Draconian countermeasures have been adopted in many countries. If the pandemic dissipates — either on its own or because of these measures — short-term extreme social distancing and lockdowns may be bearable,” the statistician writes. “How long, though, should measures like these be continued if the pandemic churns across the globe unabated? How can policymakers tell if they are doing more good than harm?”

You can read the rest at Daily Wire. The point isn’t that the virus isn’t real; the point is that the data simply doesn’t support “plague” status. As a historian, let me offer some perspective. The bubonic plague—otherwise known as “the Black Death”—first swept Europe in 1347-48. It is estimated to have had a 75 percent mortality rate, killing as much as a third of Europe’s population, that is, roughly 20-30 million people. As plagues go, that one was a world champ. As noted above, the data says the coronavirus likely has a mortality rate of less than 1 percent. The best data stems from a cruise ship where everyone was exposed and tested, and the mortality rate was .85 percent, all over the age of 70 and in frail health. This strongly suggests that we need to focus our efforts on protecting our elderly and the otherwise vulnerable. Our adopted daughter Sasha, for instance, who was born HIV-positive, falls into the vulnerable category as does, say, my mom—and yours, too, probably.

But I agree with those medical opinions that are increasingly finding the boldness to say this is a gross overreaction that will do far more damage than the virus. Media has been our worst enemy in this, whipping hysteria with 24/7 coverage that focuses on dramatic stories, overblown figures (“millions of Americans will die”), and political assassination of conservative opponents. Last year, 46,000 Americans died from the flu. 37,000 Americans died in automobile accidents. But every day, Americans assume the risks and get on with life because there was no play-by-play dramatic coverage of every death, of the gory details, of the personal loss.

As mentioned above, I was recently in North Africa. Here I was with African men who daily face dangers unheard of in America. I cannot begin to tell you how many horrible ways you can die in Africa. One must be careful in what he eats, says, and does, and even then the dangers abate little. For example, 800,000 Africans die each year from malaria alone. One in twelve Africans die before their fifth birthday. Millions more die from civil war, dirty water, violent crime, automobile accidents, famine, and pestilence of every kind. They accept this as part of their reality. Yet there they were afraid of coronavirus because they had watched CNN! It was astonishing! Of all the things that might kill me there—or them—coronavirus was the least of our worries. 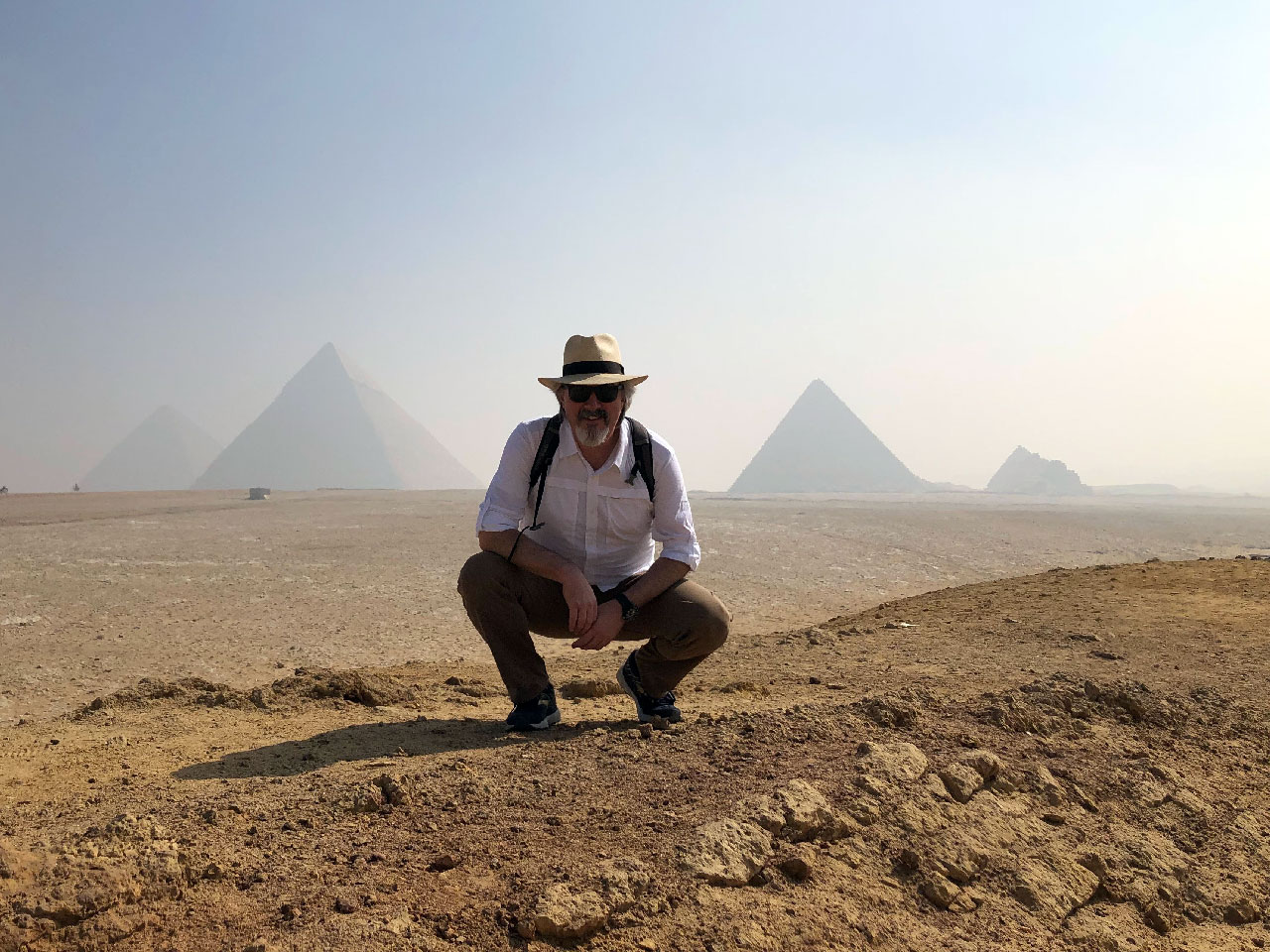 Meanwhile, Democrats have never had such a dream scenario. Historically, socialism only advances its global agenda in desperate times like civil war, political unrest, or an economic depression. Democrats are pushing for massive government expansion/expenditures and have very effectively painted Republicans as greedy bastards if they don’t play along. I firmly believe that they want for this crisis to drag out. The longer Americans are kept at home and not working, the more Americans will look to government—not their churches, community organizations, family, friends, etc.—for solutions. Spend five minutes on Twitter reading Bernie’s, AOC’s, and Ilhan Omar’s proposals and you’ll see what I mean. And the political attacks are unending. Were President Trump to personally develop a vaccine, the media would accuse him of not developing it fast enough or of engineering the plague so that he could play hero. This is how they operate. (Shut it off!) It will take great boldness to act against the panic and scale back the reaction to it. I can think of no one bolder than Trump to do it. Bernie? Biden? Pleeeease. I thank God Trump is president during this crisis. He’s shrewd and a man of action. (Speaking of Twitter, I have been active there for those of you who are interested: @larrytaunton. Gird your loins. It’s a brutal, vicious place.)

But if socialism advances in difficult times, so does the cause of Christ! What a wonderful opportunity for us as Christians to be salt and light. I truly thank God for such an opportunity. This panic offers us a chance like none other to discuss eternity, grace, mercy, and a loving God. I got into it recently with an African man who told me he trusted in the mercy of his god to get him through the coronavirus ordeal. I said, somewhat provocatively, that he must be referring to the God of the Bible because there was no mercy to be found in Allah, who is unknown, unknowable, and his salvation is arbitrary. He gave me a dark look, and then asked me to explain. It was wonderful. He was fascinated in the Christian God of grace of whom he clearly had never heard more than caricatures.

But do you fear death? You shouldn’t. Revelation 21:4 says:

“He will wipe away every tear from their eyes; there will be no more death, nor crying, nor sorrow. There shall be no more pain, for the former things have passed away.”

If you don’t look forward to that, then you have either never really suffered, you have turned a blind eye to the suffering of this world, or you don’t really understand what our God has prepared for us. I hope the next time that I die it isn’t as gruesome as the first time, but the manner of death is a very different thing from death itself. Don’t fear death. We are all, every one of us, moving irresistibly toward eternity; it’s just a question of when you make that journey. So, reconcile yourself to that fact and you’ll be happier. Truly. Don’t join the panicked. Don’t join the “Me First” selfishness that we are seeing here. Don’t act like a jerk as so many are doing in their daily interactions. Let your faith in your God, your confidence in Him, shine through. Demonstrate grace, the keystone of our faith, to those around you. Offer hope. And endeavor to be generous. This is the time to store up treasures in heaven!

We give thanks for all of you and pray that the Lord keep you safe and use you for His eternal glory.

Our next Latimer House Luncheon will be Thursday, May 19th from 11:30-12:30 at Metro Church of God in Birmingham. It will feature Fixed Point Foundation executive director Larry Alex Taunton. The topic: Karl Marx and Jesus Read more…

https://www.youtube.com/watch?v=o1R4Jgs_KiY&t=2s The Taunton boys offer their perspective. Larry Alex Taunton is the Executive Director of the Fixed Point Foundation and a freelance columnist contributing to USA Today, Fox News, First Things, The Atlantic, CNN, Daily Caller, and The American Spectator. He is also the author of The Grace Effect, The Gospel Coalition Book Read more…

https://www.youtube.com/watch?v=42_-TLPRqVA Dr. Jay Smith has been taking on radical Muslims for thirty years. He shares his wisdom and experiences in Africa and London. Larry Alex Taunton is the Executive Director of the Fixed Point Foundation and a freelance columnist contributing Read more…