There’s a reason why some state and local governments are clearing the way for Black Lives Matter protests while simultaneously putting severe restrictions on churches and synagogues—they hate God.

In 2008, I chaired a highly publicized debate at the Oxford Museum of Natural History in Oxford, England. It was here in 1860 that Thomas Huxley and Bishop Samuel Wilberforce debated the merits of Darwin’s theory of evolution by means of natural selection.

On this occasion, however, it was famed evolutionary biologist and atheist provocateur Richard Dawkins debating the existence of God with his Oxford University colleague John Lennox, a professor of pure mathematics and philosophy of science. Sitting beneath the enormous skeletal remains of a T-Rex, Dawkins said this:

Russian socialists did more than imagine the godless world John Lennon sang about and Richard Dawkins spoke of—they built it. For more than seventy-five years the world’s atheistic elites had their way with foreign and domestic policy, the military and secret police, the economy, race relations, healthcare, education, and the lives of countless millions of people.

A socialist state is no utopia. Strictly speaking, socialism is a phase on the way to a utopia called communism, and that, as every sensible person knows, is about as utopian as, well, a day in Venezuela. Back when Democrats were sensible people, President John F. Kennedy offered this insight: “Communists have never come to power in any country that was not disrupted by war, internal repression, or both.”

But the failure of socialism is not only a wholly unjustified confidence in human government. Socialism begins with a premise that is antithetical to Christianity: there is no God. The great Russian novelist Fyodor Dostoevsky observed this connection between atheism and socialism long ago:

In other words, socialism is much more than an economic or political question. It is a spiritual question if only because it denies the very existence of the spiritual. A former socialist revolutionary, Dostoevsky knew his subject well. Upon his conversion to Christianity, he did more than renounce his atheism; he renounced socialism, because it was, in his view, atheism masquerading as political philosophy.

In his great novels Demons (also known as The Possessed) and The Brothers Karamazov, Dostoevsky predicted that if Russia’s socialists ever gained control of the levers of power, it would lead to the expulsion of Christianity from public life, and with it, the annihilation of morality, the rise of totalitarianism, and the proliferation of state-sponsored genocide. He would prove prophetic.

Historically, socialist regimes have sought the expulsion of Christianity from public life for a reason that is sometimes lost on Christians themselves. Christianity is, by its very nature, subversive insofar as it teaches that there is a God whose laws supersede those of man—any man. As theologian Francis Schaeffer insisted a generation ago, no totalitarian or authoritarian state can tolerate a people who say that they have an absolute universal standard by which all men and governments are judged. Socialist and fascist regimes well understand that Christians do not recognize the state as the final arbiter of truth. Moreover, where temporal law and eternal law are in conflict, the Christian may in good conscience violate the former while clinging to the latter. That is, after all, how America was founded.

By contrast, socialists exalt the state in the place of God. This stands in opposition to a traditional American view of government, where, as Alexis de Tocqueville observed in 1835, “as soon as a man has acquired some education and pecuniary resources … all that he asks of the state is not to be disturbed in his toil.” And while American government has at no time been Christian, it has historically respected the role Christianity has played in public life. Socialism, however, by making the state both the means and the end, violates the very first commandment: You shall have no other gods before me. It then proceeds to violate the other nine with wild abandon.

If Russians thought life under the czars was tough—and it unquestionably was—Marxists would introduce them to horrors so vast in scale that it beggars the imagination. Figures vary wildly, but by conservative estimates no fewer than 60,000,000 people would lose their lives under Soviet (think, socialist) rule. Where did the utopian dream go wrong?

However attractive it may be to say so, it is inaccurate to suggest that all of those who worked and, in some cases, gave their lives to bring about socialist regimes in Russia and a dozen other countries were all murderous brigands. At least, most did not start that way, whatever their end. On the contrary, many sincerely believed that the system was the answer to mankind’s problems of peace, bread, and land. Historian Sheila Fitzpatrick characterizes the socialist revolutionary spirit very well:

All revolutions have liberté, égalité, fraternité, and other noble slogans inscribed on their banners. All revolutionaries are enthusiasts, zealots; all are utopians, with dreams of creating a new world in which the injustice, corruption, and apathy of the old world are banished forever. They are intolerant of disagreement; incapable of compromise; mesmerized by big, distant goals; violent, suspicious, destructive…. They have the intoxicating illusion of personifying the will of the people, which means they assume the people is monolithic. They are Manicheans, dividing the world into two camps: light and darkness, the revolution and its enemies. They despise all traditions, received wisdom, icons, and superstition. They believe society can be tabula rasa on which the revolution will write. It is the nature of revolutions to end in disillusionment and disappointment…. All revolutions destroy things whose loss is soon regretted.

It is the nature of socialist revolutions to end in “disillusionment and disappointment” because, as we have already noted, they begin with the wrong premise—there is no God. Hence, socialism’s whole trajectory hits wide of the intended mark. And how could it do otherwise? In the biblical worldview, the state is a temporal institution meant to serve man, an eternal being. In the socialist model, this is reversed: man, a temporal being, serves the eternal state.

To listen to socialism’s modern advocates is—I shall endeavor to be kind—to venture into the idiotic. Secular regimes killed no less than 125,000,000 people in the twentieth century alone. That is more than all religious wars from all previous centuries combined. But Bernie Sanders, Alexandria Ocasio-Cortez, and those filling the ranks of the rabidly Marxist Left aren’t ones to be put off by such trifles. The late Walter Duranty, who used his position as Moscow bureau chief for The New York Times to serve as an apologist for Stalinism, put it in philosophical terms that well describe the mentality of every socialist before and since: “You can’t make an omelet without breaking eggs.”

You see, they really think that a society based on this atheist utopian philosophy (i.e., Marxism) is an original idea. Perhaps they don’t know any better. Someone should tell them.

In his farewell address in September 1796, George Washington offered a warning to his fellow citizens:

And let us with caution indulge the supposition that morality can be maintained without religion. Whatever may be conceded to the influence of refined education on minds of peculiar structure, reason and experience both forbid us to expect that national morality can prevail in exclusion of religious principle.

Washington was not simply playing to the masses by tossing them this morsel of religious rhetoric. He was referring to a dangerous European experiment, the French Revolution, which sought the destruction of the Church and institutionalized atheism. The experiment was a failure. What followed included regicide, civil war, and the Reign of Terror. Washington was well aware of these events and recognized the pitiless nature of a godless society.

It must be understood that atheism is not merely incidental to such regimes. It is integral to the system, because all good socialists are, by definition, atheists. As Princeton polymath David Berlinski wrote:

I will go one further than Dr. Berlinski: Black Lives Matter, with their wanton destruction of property, cynical disregard for the truth, and mistreatment and manipulation of people, does not believe that God is watching what they are doing.

Larry Alex Taunton is the Executive Director of the Fixed Point Foundation and a freelance columnist contributing to USA Today, Fox News, First Things, The Atlantic, CNN, Daily Caller, and The American Spectator. He is also the author of The Grace Effect, The Gospel Coalition Book of the Year The Faith of Christopher Hitchens, and the soon-to-be-released Around the World in (More Than) 80 Days. (Available for pre-order now) You can subscribe to his blog at larryalextaunton.com and find him on Twitter @larrytaunton.

Larry Alex Taunton joins Eric Metaxas to discuss Biden’s Independence Hall speech, and zeroes in on the real reason why Biden chose a devil-red background for the most shocking ever given by a U.S. president. Read more… 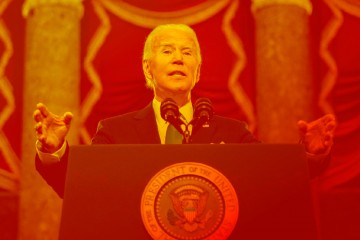 The blood red hues were no mistake. This was a call for blood—and a calculated provocation. Have you noticed how obsessed Democrats are with the subject of violence?  To hear their telling of it, MAGA Read more…