Father of the Bride … and a Groom

Lord, have mercy on me.

I stood at the back of the aisle in our improvised outdoor chapel on this beautiful June evening in the American South. I patted my daughter Sasha’s hand reassuringly with all the outward confidence of a dad who’s been there, done that. Now, now, dear, it’ll be fine. A tall, slender, beautiful bride if ever there was one, Sasha smiled anxiously, full of the excitement that is the prerogative of every young woman on her wedding day. 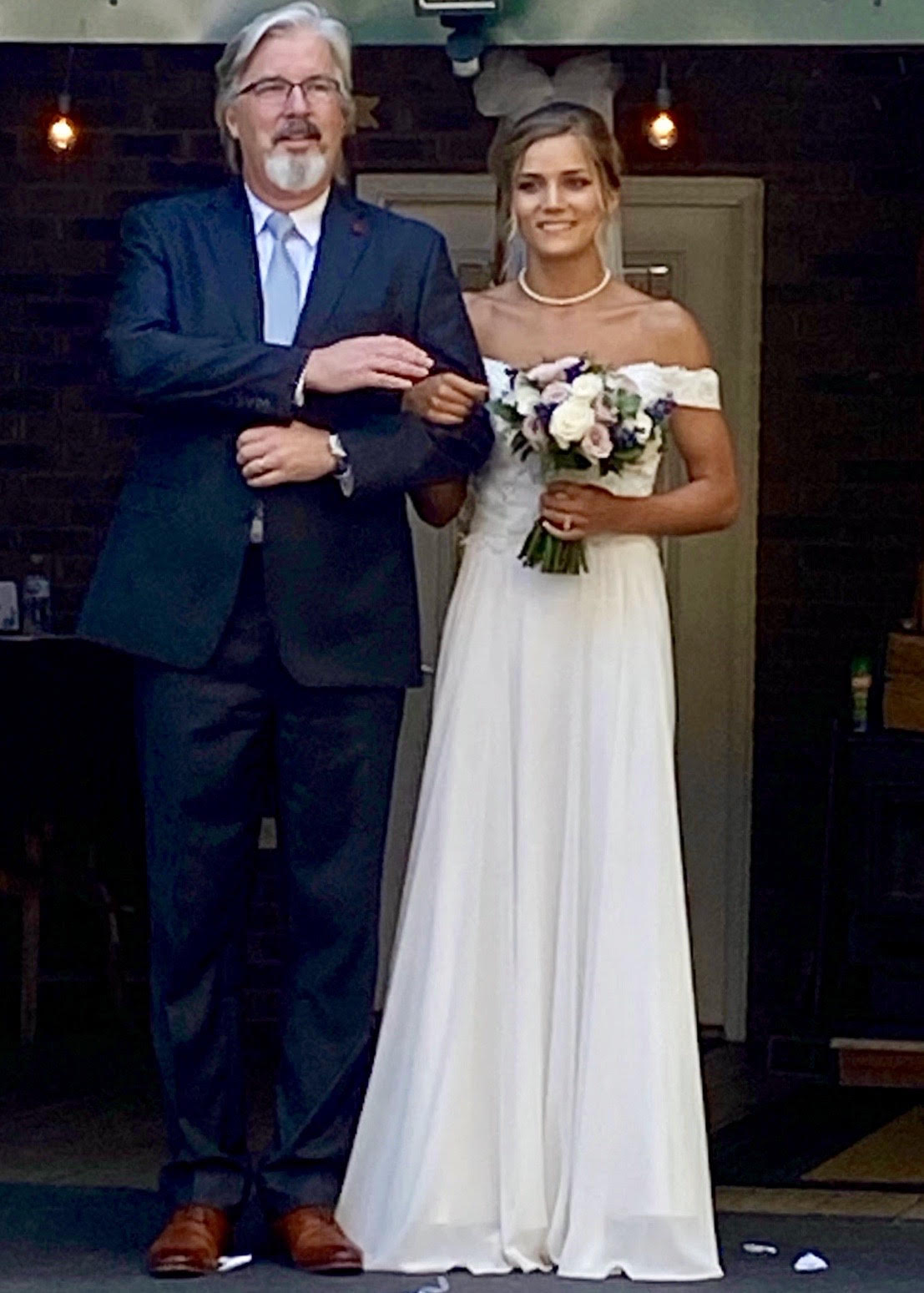 As is customary, the gathered rose to their feet, turning to face her in reverence as the musicians started the processional song. “I am so nervous!” Sasha had said to me minutes before when we were alone. “I don’t want to embarrass myself!” I did what dads are supposed to do in such moments and held her, speaking words of comfort.

“You’ll be fine, sweetheart. This is your moment.” 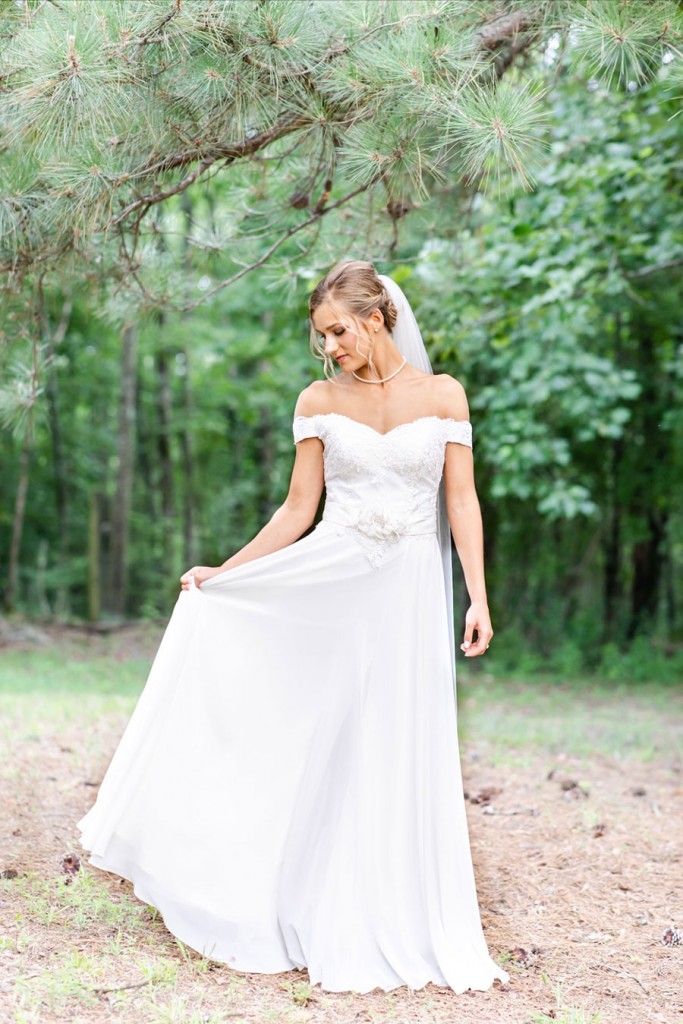 But I was talking nonsense. The truth is, I was suddenly an emotional wreck. I have married-off two sons, and while those were splendid occasions, I felt nothing like this. After all, both of them had moved out of the house before their marriages and, well, they were sons. This was my daughter, and as every father knows, it’s different. I can’t offer any other explanation. Until you are a father of the bride (FOTB), you can’t possibly understand.

I felt as if I would melt like hot wax into a puddle before we got to the end of this forced march. The inner voice that uses mockery as a means of motivation heaped scorn on this weak-kneed version of Larry Alex Taunton: Get ahold of yourself, you @$%*! (My inner voice, like my father, cusses like a sailor.) You can do this! You have journeyed through war zones. You have survived cancer. You have debated a Muslim on Al Jazeera before a global audience of 260 million. And you didn’t shed a tear when a car hit you. You can do this!

Lord, have mercy on me. I repeated the refrain as part plea, part prayer. But I was falling apart. I was going to ruin Sasha’s moment by sobbing like a complete idiot all the way down the aisle.

Then it came to me: I thought about Alabama’s latest national championship. Think on the big plays of that game, I told myself. Yes, this inane bit of recent sports history became my mental focal point the way one focuses elsewhere when the nurse says, “Drop your pants.” 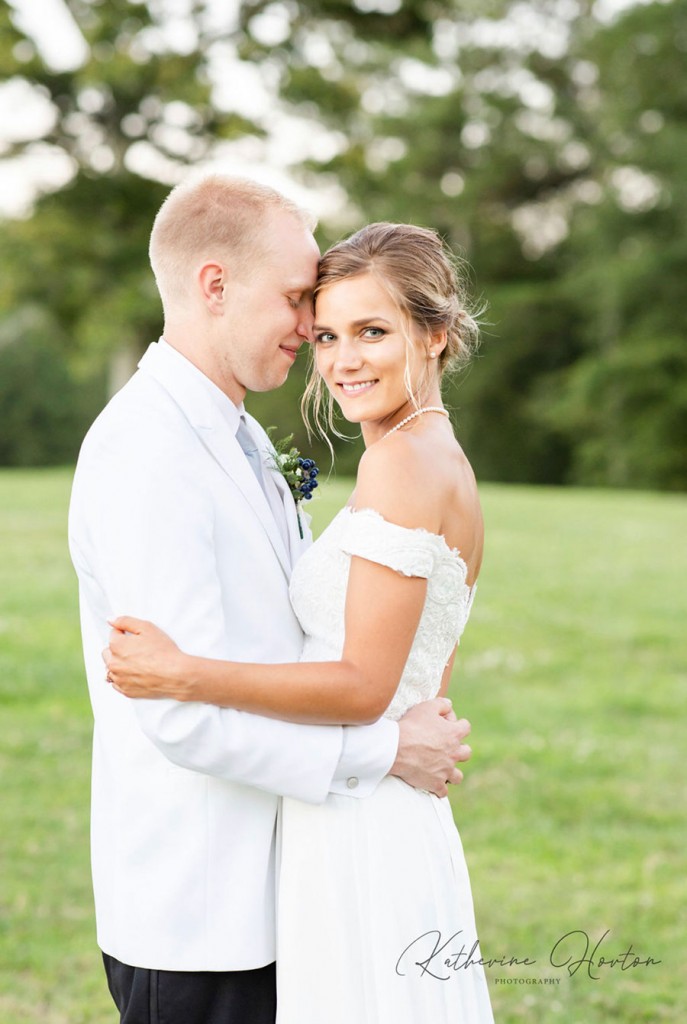 As the gentle chords of whatever—for all I know they were singing “99 Bottle of Beer on the Wall”—wafted through the southern sky, I could see Heisman Trophy winner DeVonta Smith running behind the Ohio State secondary like a groom hotfooting it to his honeymoon, Mac Jones showering his receivers with TD passes like rice on newlyweds, and Nick Saban lifting the national championship trophy like the first slice of wedding cake.

Ah. Yes. This was working. I smiled at the memory of it all. Roll Tide.

The buildup to this moment was months in the making. If you have no other takeaway from this column, know this: FOTBs are pitiable, irrelevant men. Just ask one. We are a buffet line through which the mother of the bride and bride-to-be pass with trays full of dishes piled high with things you thought—silly you!—were unnecessary. In their hands are no forks, only very sharp knives: We’ll take the wallet, add credit cards, hold the opinions—unless they are affirming.

My wife is sensible, practical, and anything but high-maintenance. The same can be said of my daughter. She is no “Bridezilla.” But these last few months have been, oh, more than a little stressful in the Taunton household.

To the uninitiated, this is the American South. Weddings in this part of the country are like Queen Elizabeth II’s Diamond Jubilee: troops marching by in review, jets flying overhead trailing smoke, Maroon 5 singing at the reception, and all of it capped off by a massive fireworks display that can be seen from the moon. One-upmanship is the name of the game. If Bride X had this, Bride Y needs that. 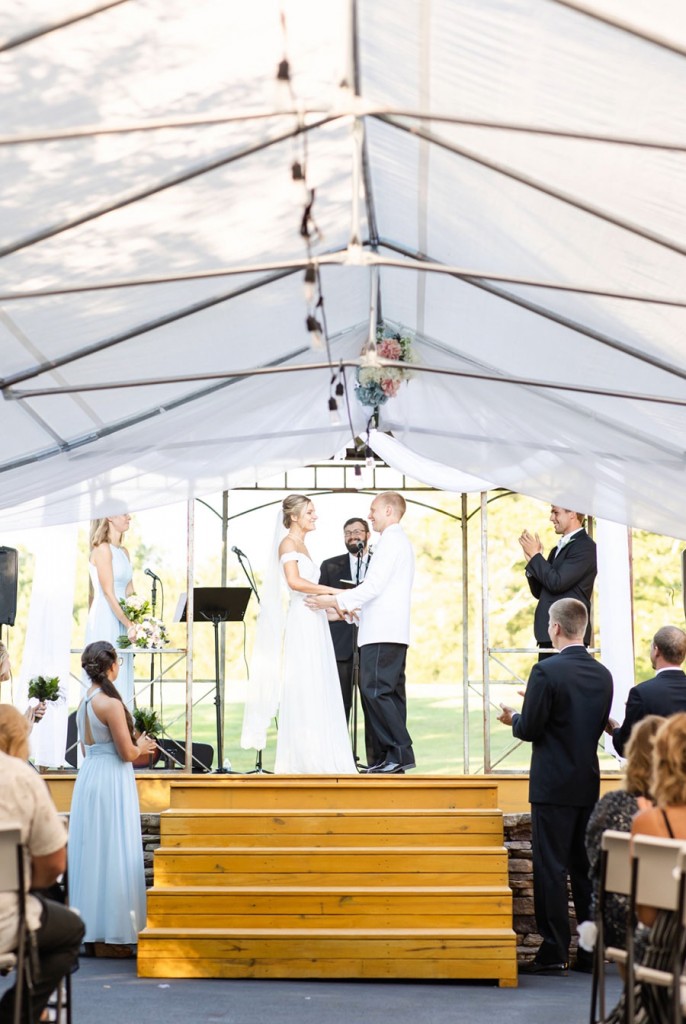 Okay, truth is, we did none of that. We kept it small, informal, relaxed. Even so, Lord, have mercy on me.

As every southern FOTB can tell you, his love for his daughter is measured by the degree of debt he incurs. Some men face economic ruin by playing the market. Others by gambling or the loss of employment. Then there are southern FOTBs. See them crying? Of course, they are.

“I offered my daughter and her fiancé $20,000 to elope,” one naive FOTB told me. “My daughter was having none of it.” This is typical FOTB thinking. It is also indicative of our cluelessness. Sure, your future son-in-law, lured by the dollar signs, jumps at the idea. The bride? Not so much. You’ll understand when she looks at you like you’ve just offered her an all-expenses-paid trip to a Biden detention center.

But it is as I said, my wife and daughter are sensible. So much so, that I bolted for South America earlier this year, waiting it all out like bin Laden in a Pakistani compound. You, dear reader, were the beneficiary of my self-imposed wedding-prep exile. Feeling sorry for myself, I even thought of a Twitter hashtag: #FOTBLM—“Fathers of the Bride Lives Matter.” We don’t deserve your contempt; we deserve your compassion—and your contributions.

Like a knight in shining armor, a friend, having once himself been milked like a cow for a wedding, came riding to my aid, supplying the alcohol for the reception—or was it to anesthetize me? I don’t even drink, and yet I was ready to get hammered well in advance of the reception. 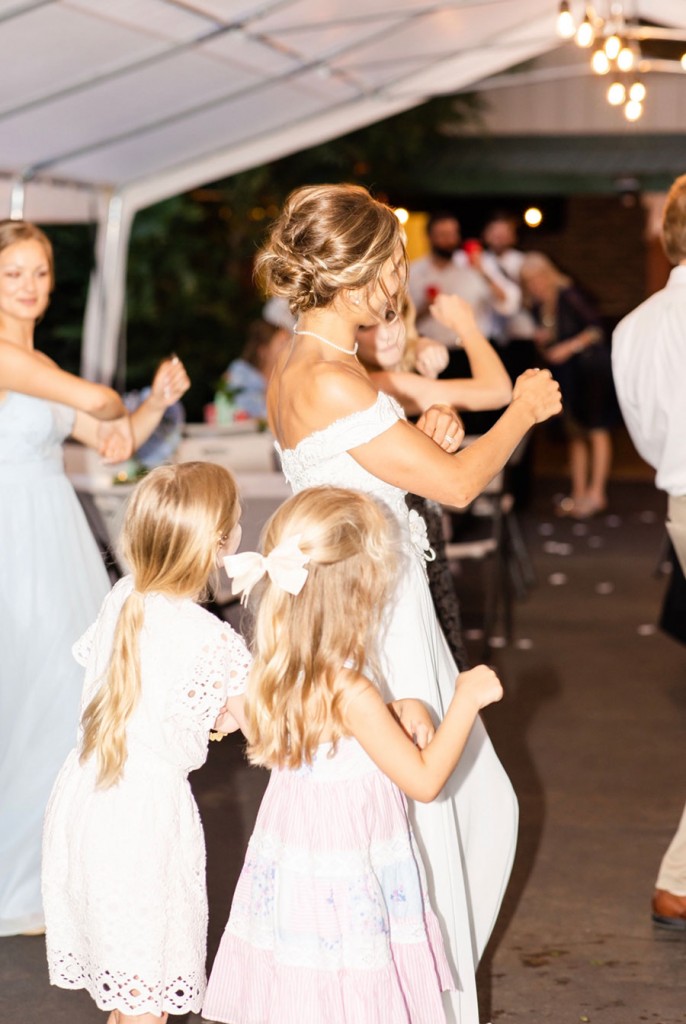 Exacerbating it all was the fact that we played host to not just one, but two weddings in two weeks. (To say nothing of the addition of another grandchild just before wedding no. 1.) That’s comparable to “running the gauntlet” in Her Majesty’s Navy circa 1800. That’s right, our middle son Christopher announced his engagement at roughly the same time that Sasha announced hers.

It was like some sort of matrimonial pandemic. Love Potion No. 9, manufactured in some sketchy Wuhan lab, had escaped like a genie from a bottle and infected the hearts of my children all at once. Attempts to flatten the amorous curve were as useless as a ham sandwich at a bar mitzvah, the virus spreading with ease through FaceTime and Zoom calls, Facebook and texts, making the infected irrational and starry-eyed.

Lauri and I agreed to host the weddings at our rustic ranch outside of Birmingham, Alabama on one condition: that they be small gatherings. The house isn’t big enough for anything else and our tent simply won’t hold more than 75 or so.[1] If that met with their approval, we would proceed.[2]

Christopher and his lovely bride Jenn had a wonderful wedding celebration. And, then, two weeks later, here I was, walking Sasha down the aisle feigning self-possession, all while replaying highlights of the Alabama-Ohio State game in my mind. Roll Tide Roll.

With the boom of cannon and a twenty-one-gun salute, they were pronounced husband and wife. As they drove away, tin cans trailing behind the car reading “JUST MARRIED,” satellites passing over Alabama recorded the thermal bloom of a laser-light show with a heat signature comparable to Chernobyl. We will neither confirm nor deny that it was just part of another southern wedding.

Lord, have mercy on FOTBs everywhere. 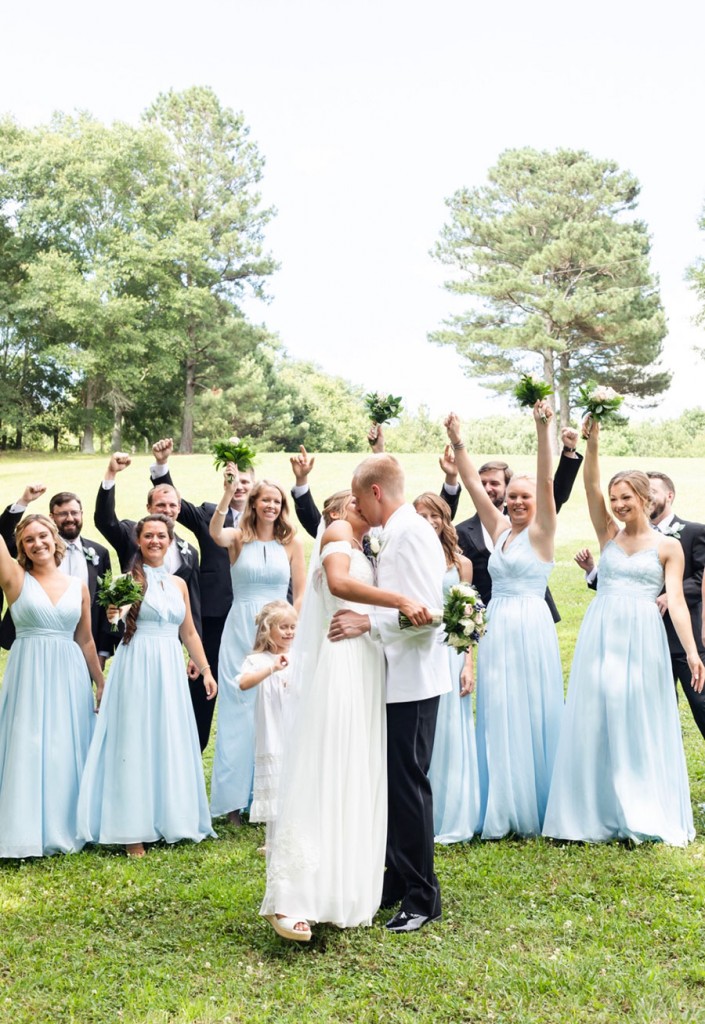 [1] Note to future FOTBs: if an outdoor wedding, you must have a tent in case of rain.

[2] If you did not receive an invitation, please forgive us. We kept this very small.