Political corruption. Homosexuality. Rioting. Drag queens. In an often-overlooked passage in his Epistle to the Romans, the Apostle Paul makes a sophisticated philosophical argument that these things are not only connected, but are, in fact, inevitable.

America. Theater of the morally preposterous. A clown show.

Back when I was writing more regularly on Islam and debating devotees of that religion on CNN International and Al Jazeera, people would ask me why some Muslims called America “The Great Satan” and others hated us with no less venom. I would tell them that it was chiefly due to the policies championed by the Left and being promoted throughout the world, the Islamic world no less than others. Abortion and homosexuality, deeply offensive to Muslims, are their recruiting tools. Muslim radicals, seeking to rally would-be Jihadists to their cause, just point to America and say: See! These people can’t tell the difference between a man and a woman, much less between right and wrong. Join us in destroying them!

These days, people don’t ask such questions. Perhaps that’s an indication things have degenerated to such a degree that they finally see the problem. It’s just too easy to mock America now. Moral high ground? Please. We have advanced from the “When does life begin?” stage of moral decline to the Late Empire “What is a woman?” stage. One look at social media, a Disney movie, or corporate branding and “pride” is everywhere. But the pride goes well beyond homosexuality. It is a preening, swaggering pride in drag queens, a sharp rise in abortions, the sexualization of children, and even infanticide. (I shocked Blaze TV’s Jason Whitlock when I informed him of the latter near the end of this recent interview.)

Questions these days focus on how seemingly intelligent, even highly intelligent, people could embrace morally absurd propositions like pregnant men, women with penises, and climate alarmism. How could any educated person think socialism and its variants—for example, Marxism, Critical Theory, Intersectionality, etc.—offer anything but ruin or that adolescent sex-change operations are anything but child mutilation and abuse?

The answer is found in the New Testament book of Romans.

Some of you are rolling your eyes. The Bible. Ugh. But hear me out. It is in Romans 1:18-32 that the Apostle Paul, who was himself highly educated, lays out an intriguing philosophical argument.

18 For the wrath of God is revealed from heaven against all ungodliness and unrighteousness of men, who by their unrighteousness suppress the truth.19 For what can be known about God is plain to them, because God has shown it to them. 20 For his invisible attributes, namely, his eternal power and divine nature, have been clearly perceived, ever since the creation of the world,[a] in the things that have been made. So, they are without excuse.21 For although they knew God, they did not honor him as God or give thanks to him, but they became futile in their thinking, and their foolish hearts were darkened. 22 Claiming to be wise, they became fools, 23 and exchanged the glory of the immortal God for images resembling mortal man and birds and animals and creeping things.

24 Therefore God gave them up in the lusts of their hearts to impurity, to the dishonoring of their bodies among themselves, 25 because they exchanged the truth about God for a lie and worshiped and served the creature rather than the Creator, who is blessed forever! Amen.

26 For this reason God gave them up to dishonorable passions. For their women exchanged natural relations for those that are contrary to nature;27 and the men likewise gave up natural relations with women and were consumed with passion for one another, men committing shameless acts with men and receiving in themselves the due penalty for their error.

28 And since they did not see fit to acknowledge God, God gave them up to a debased mind to do what ought not to be done. 29 They were filled with all manner of unrighteousness, evil, covetousness, malice. They are full of envy, murder, strife, deceit, maliciousness. They are gossips, 30 slanderers, haters of God, insolent, haughty, boastful, inventors of evil, disobedient to parents,31 foolish, faithless, heartless, ruthless. 32 Though they know God’s righteous decree that those who practice such things deserve to die, they not only do them but give approval to those who practice them.

Paul argues that truth is absolute. Indeed, instead of being separate from God, it is part of his very essence. All truth flows from him. Theologian A.W. Tozer, speaking of this profound truth that not only defines the Lord, but defines us in relationship to him, writes:

“‘I Am that I Am,’ says God. ‘I change not.’ Everyone and everything must measure from that Fixed Point.’”

Paul further asserts that it is the nature of men to deny the truth, to suppress it, even though “it is plain to them” and “clearly perceived.” Moreover, they pervert it.

This passage has long intrigued me. It is a blueprint for how a society, any society, comes off the rails. It is a picture of the progression through which a morally broken people will inevitably pass.

Having weighed anchor from Truth, there follows a drift toward a moral abyss. Like a series of waterfalls in a river, Paul says “God gave them up” three times: verses 24, 26, and 28.

Children? Even with the overturning of Roe v Wade, they enjoy scant protection. Remember, the Supreme Court did not outlaw abortion. They simply pushed the issue back to the states. That industry of death will continue in Democrat strongholds like New York and California. Many companies are offering “abortion holidays” to those who want to go out of state to kill their unborn children.

Homosexuality is not, as many Christians allege, “a sin like any other.” Like saying, “Hell is separation from God,” this is one of those things Christians say that is a distortion of a truth. All sin is the same insofar as it separates us from God. But all sin is not the same in terms of consequences. For instance, in the Old Testament, we see the Lord tolerate polygamy. Is this because it wasn’t a sin? No, it was and is. But it is not a perversion of nature. “Homosexual conduct of any form (not excluding stable homosexual relationships) God has rejected in all ages, for it is a sin against nature, which is to say, a breach of His created order.”

This is where we are. The societal ship, having slipped its moorings, has plunged headlong over the aforementioned series of cataracts, each signifying a new low in cultural self-abasement. They not only do “what ought not to be done…. but give approval to those who practice them.” This was the path taken by the Ancient Greeks, the Roman Empire, and the Hebrews themselves.

In “suppressing” belief in God, Paul is talking about more than mere disbelief. Because Western civilization is built on Judeo-Christian thought in everything from our art and literature to the underpinnings of our law and science, there are many unbelievers who accept, if only unwittingly, the moral and intellectual framework that worldview provides. No, Paul is talking about an active, aggressive will to deny God in all things. He argues that once you do that, it necessarily leads not only to moral degeneracy, but to mental instability. You become, in effect, untethered from the rational.

French historian and philosopher René Girard (1923-2015), an atheist who was a late in life convert to Catholicism, thought that this was at the heart of Friedrich Nietzsche’s descent into insanity. Nietzsche’s atheistic philosophy, he believed, destroyed the German philosopher’s connection with reality.

As Paul notes in Romans 2:15, the Lord, in writing his law upon the hearts of all men, has given them conscience, believers and unbelievers alike. Conscience may compel us to help someone in need, to seek forgiveness from those we have wronged, or it may lead us to the Cross itself. Conscience is the soul’s voice. When contravened, it cries out.

Of course, conscience can be killed. Just as speed bumps on a road serve to warn drivers, so conscience works, jostling us from our moral slumbers. Violated often enough, however, its voice grows fainter. When that happens and man’s nature is left to indulge its evil appetites, he becomes “filled with all manner of unrighteousness, evil, covetousness, malice.”

It has long been my contention that so-called “New Atheists” like the late Christopher Hitchens and Richard Dawkins had breathed deeply the air of a Judeo-Christian culture, and that served to inform their moral sensibilities so that even as they denied God’s existence intellectually, they accepted his existence at some moral level. Christopher shrank from following his atheism to its cold, dark, logical conclusions. Now the New Atheists’ ideological children have no such hesitation. Conscience has been seared, thus, we find a generation ready to embrace every sort of absurdity. Instead of a Nietzsche here or there, we have an entertainment industry, educational institutions, and governments filled with them. “Claiming to be wise, they became fools.”

In his excellent commentary on Romans, Kent Hughes makes an argument I’ll summarize this way:

God made angels all spirit, no flesh.

He made animals all flesh, no spirit.

He made man a composite of both spirit and flesh.

Thus, man can ascend to the higher, the spiritual—

Or descend to the lower, the animal.

We are seeing Western society embrace its baser, animal self.

As G.K. Chesterton observed: “When men choose not to believe in God, they do not thereafter believe in nothing, they then become capable of believing in anything.” 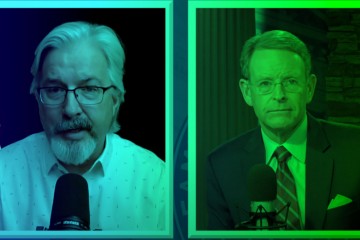 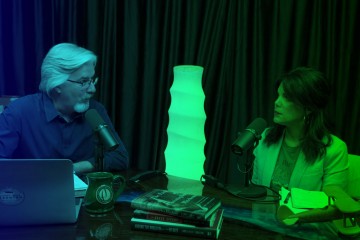