The blood red hues were no mistake. This was a call for blood—and a calculated provocation.

Have you noticed how obsessed Democrats are with the subject of violence?

To hear their telling of it, MAGA Republicans “represent a clear and present danger to our democracy.” You would almost think these mostly middle class Americans are in the streets rioting, tossing Molotov cocktails through the windows of businesses, looting, burning cities, attempting assassinations of Supreme Court Justices, and, well, doing what Antifa and Black Lives Matter, the Brownshirt element of the Democrat Party, have been doing for years. 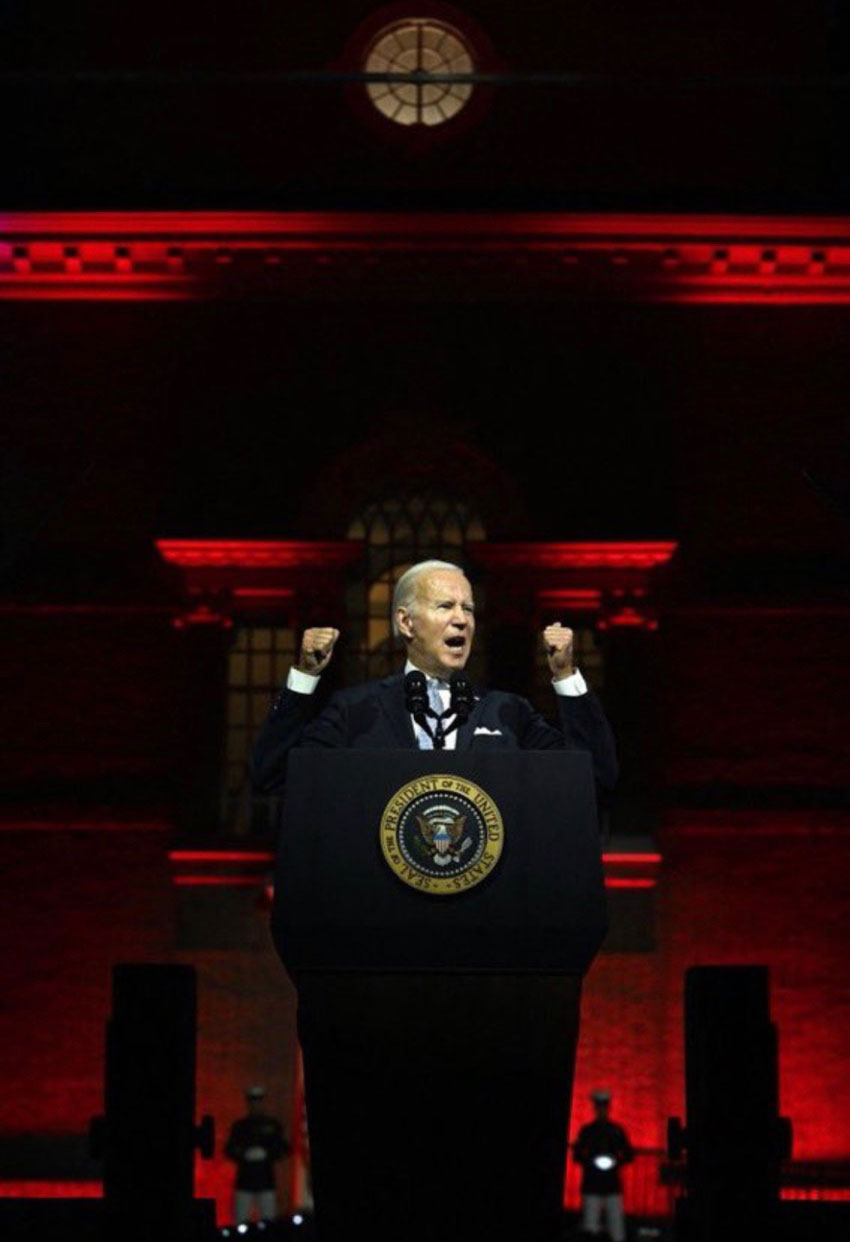 Last Thursday, Joe Biden let loose a harangue of fiery anti-MAGA—no, anti-American—rhetoric in front of Philadelphia’s historic Independence Hall. But this wasn’t the Independence Hall of your Schoolhouse Rock! youth. This was an Independence Hall illuminated in a hellish red as if the speech were being broadcast live from Dante’s Inferno. As darkly ominous silhouettes of Marines flanked Biden like white gloved demons, Biden shook his fists in a manner so reminiscent of Hitler that it alarmed some Jews.

Many on the Left have assumed this was simply “a gaffe.” Perhaps Biden’s event planners are colorblind or maybe they just didn’t know any better. But I’m not buying it. This was no mistake, and it was about more than color schemes. Biden’s speech was as carefully choreographed as Leni Riefenstahl’s Triumph of the Will. And that raises some interesting questions as to the purpose(s) of this address.

Biden’s speech appears to have had a threefold purpose.

First, let’s deal with the obvious: Democrats have a pathological fear of Donald Trump.

A demonstrably false Russia collusion narrative, two politically-motivated impeachments, a media “conspiracy” engineered by “leftwing activists and business titans” to prevent his reelection, a raid on Mar-a-Lago for which we have not been given clear justification, and the ongoing demonization of Trump voters via the steady drip of January 6th hearings and, now, this chastening of roughly 85 million Americans, make that clear. For them, Trump is the Freddy Krueger of politics. He just won’t die. On the contrary, his popularity following the raid on his Florida home, a raid designed to cast him as a traitor, has soared.

Second, Biden’s speech signaled an escalation in the war on roughly half of the voting public.

Where Biden might have used this hallowed stage to allay an ever-growing anxiety about spiraling inflation and debt, out of control government spending, looming food shortages, a sharp rise in violent crime, the sexualization of children, tax increases, war in Ukraine, and the hiring of an additional 87,000 (armed) IRS agents for reasons that seem obvious, Biden, “the great unifier,” did nothing of the sort. He instead employed extremist language denouncing alleged extremists, signaling Democrats intend to ramp-up their increasingly aggressive posture toward Americans who dare oppose their radical social, political, and economic agenda.

In his magnum opus on Stalinism Let History Judge, Russian historian Roy Medvedev says, “Every despot building the cult of his own personality needs a scapegoat.” Any meaningful study of despotism will lead you to the same conclusion. It’s not just Hitler scapegoating the Jews. It’s Stalin scapegoating Old Bolsheviks, kulaks, and Trotskyists; it’s Mao and intellectuals; Tito and anti-communists; Pol Pot and “enemies of the people,” and so on.

Scapegoating is a means of uniting a public against a common enemy while serving to distract them from the failures of the regime. Scapegoating also emotionally manipulates a public to the point where marginalization and even violence against those designated as “enemies of the people” seem both justified and necessary. Biden’s speech was very much in this tradition, and given the myriad failures of his administration, it is clear why misdirection is desirable.

Third, but closely related to the second, Biden’s speech appears to be a calculated attempt to provoke a violent response from those targeted by it. 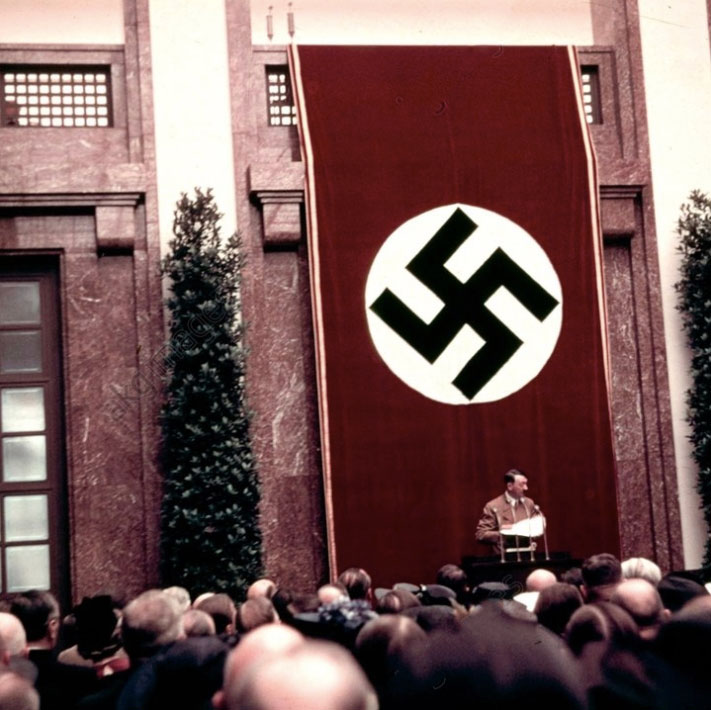 The blood red backdrop was symbolic of a speech tinged in violent rhetoric. Democrats know that their side is so ideologically committed that Biden could give such a speech and it would be forgiven like a poor choice of neckties. They also knew that the symbolism would not be lost on conservatives, and this is who they really mean by “MAGA Republicans,” not some “semi-fascist” element as Biden claimed in a separate speech. The only thing missing from the background was a massive swastika, and Biden’s handlers might have used that had they been certain their Democrat base would have tolerated it. 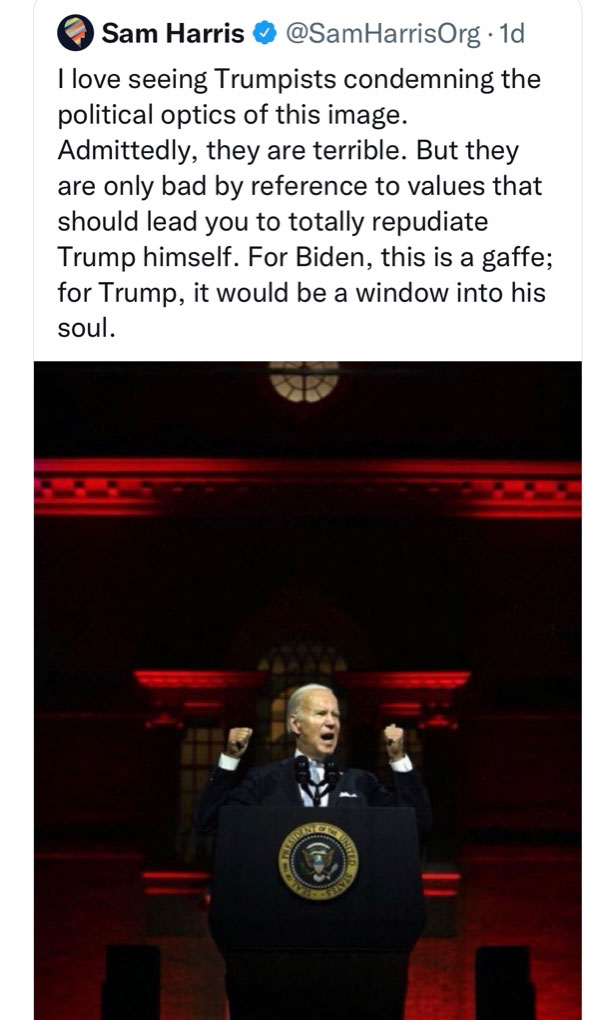 Demonization of one’s enemies is sometimes deemed inadequate, and so it is here. In 1933, Hitler, whose propaganda machine ran an unrelenting campaign to dehumanize the Jews, engineered the Reichstag fire. This imaginary insurrection was presented as proof that the Jews were evil subversives who must be eradicated from German society. Not coincidentally, a month later, on the outskirts of Munich, Dachau, the first of many so-called “protective custody camps,” was opened. 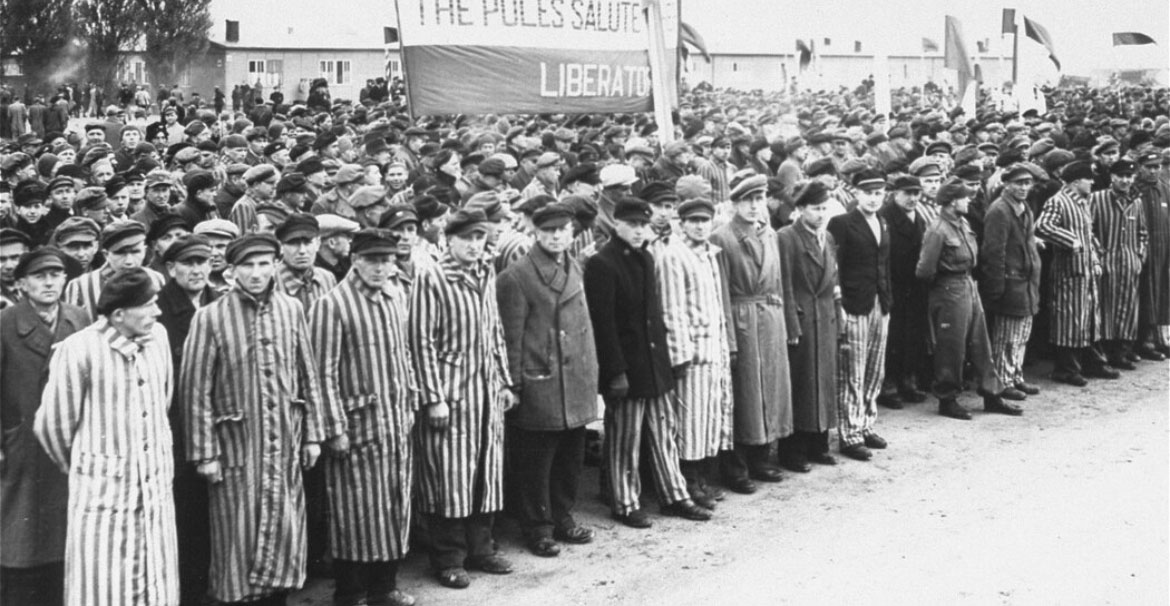 The following year, Stalin, who admired how Hitler dealt with his domestic enemies, employed much the same strategy when his NKVD—predecessor to the KGB—arranged for the assassination of Stalin’s popular subordinate, Sergei Kirov. The “conspiracy” was used as a pretext for the mass arrest and execution of millions.

Democrats want their own Reichstag fire or Kirov assassination, and they thought they had it in the January 6th “insurrection,” but the hearings have been a dismal failure insofar as Trump’s popularity goes. Likewise, the raid on Mar-a-Lago failed to move the needle.

This brings us to Philadelphia and the felt necessity for the speech from Hell.

In his study of the Russian gulag system, historian George Kennan observed:

“Wrong a person … deny him all redress, exile him … if he complains, gag him if he cries out, strike him in the face if he struggles, and at last he will stab and throw bombs.”

Democrats want to provoke some MAGA hat wearing type to “stab and throw bombs.” Not of the Jussie Smollett variety, mind you, but that will suffice in a pinch if they can get away with it.

This is where we are in America. The fascist threat is not coming from the political Right as this administration and its media allies would have you believe. It is coming from the fascist Left. And before someone on the Left fires off an ill-advised email or tweet to me, I extend this challenge:

Give me a credible definition of “fascism” that does not first and foremost apply to this modern iteration of the Democrat Party.

Is fascism Godless? Totalitarian? Racist? Does it weaponize government and industry against perceived enemies? Is it anti-democratic? Does it rig elections?

History, it is alleged far too often, repeats itself. But radical elements within the Democrat Party seem more than a little determined to repeat it with chilling consistency. Read Christabel Bielenberg’s powerful memoir The Past is Myself chronicling the societal shift in 1930s Germany. An intelligent, sensitive Englishwoman married to a decent German lawyer who was later implicated in the July Plot to kill Hitler, Bielenberg thought little about the changes at first because they didn’t affect her or her family. That changed. 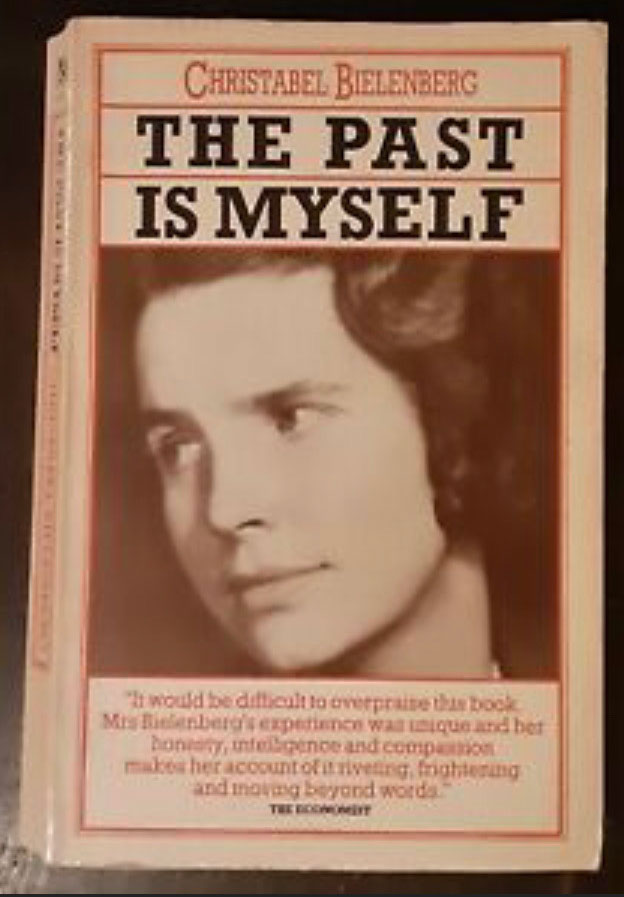 In Journey into the Whirlwind, Eugenia Semyonovna Ginzburg’s memoir of the post-Kirov purges, Ginzburg reports similar phenomena in Stalin’s Soviet Union: demonization of political opponents, societal disenfranchisement, mass arrests, show trials, and, finally, executions. (Admittedly, the force of Ginzburg’s memoir is blunted by the fact that she remains a dedicated communist until the bitter end, even as her family was destroyed and she was wrongfully imprisoned.) 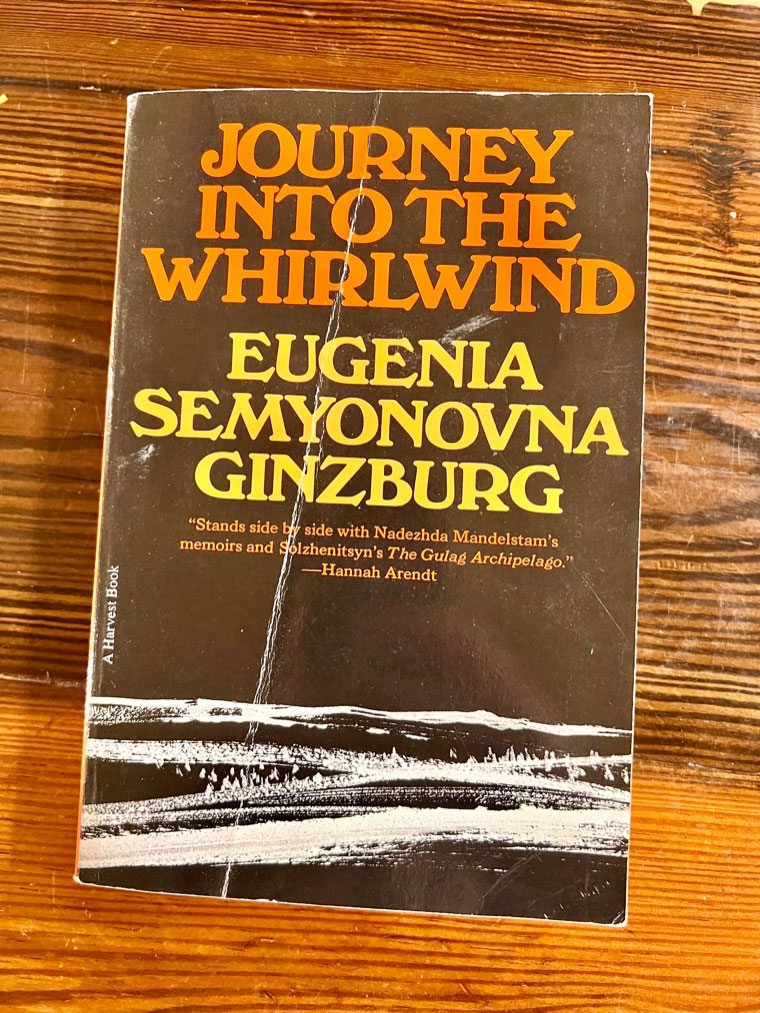 We are foolish if we think that which has happened in much of the world beyond America cannot happen in America.

History tells an opposite tale.