Colin Kaepernick and the Well-Paying Role of Victimhood

Colin Kaepernick, the mediocre NFL quarterback turned activist, is in the news again. And it is for all of the wrong reasons.

In a rare display of American patriotism, Nike was preparing to release a Fourth of July Special Edition Air Max 1 Quick Strike tennis shoe featuring the Betsy Ross American flag on the heel. That flag, displaying thirteen white stars in a circle on a field of blue, is strongly associated with the original thirteen American colonies and the independence of this country.

But not for Kaepernick.

No, for him, it means oppression and racism. Kaepernick, a spokesperson for Nike, expressed his concern to Nike decision-makers about what such a shoe represents and they abruptly pulled it before its launch.

One wonders if Kaepernick really knows anything about Betsy Ross, the Revolutionary War for Independence, or American history in general. It gets tiresome hearing the likes of Kaepernick – a mega-millionaire thanks to the NFL, Nike, and a free market economy he enjoys in America, one of the few places on earth where a man of such limited ability could succeed so wildly – complain about his oppression and that of others in this country.

Actually, this is not entirely accurate. Kaepernick’s money largely came from his lawsuit against the NFL. Settled out of court, it is believed that the NFL owners paid him somewhere in the neighborhood of $60 – $80 million not for any actual wrongdoing, but just to go away.

This is the country in which we now live. The activists on the Left, once fringe, have managed to mainstream their radical agenda; an agenda that is full of loathing for this country, is racist to its core, and out to demolish what America has traditionally represented. The Kaepernick-as-civil-rights-icon narrative is nonsense. This is nothing more than extortion disguised as social justice. Kaepernick has leveraged his color to portray himself as a victim, and he’s being paid millions for the scam.

Nike-like efforts at cultural sensitivity usually achieve exactly the opposite. While appeasing a vocal, radical minority, they offend the sensible majority.

At no point in the history of this country have we been free from the defects of human nature. Our history has its share of injustice, oppression, hate, anarchy, racism, and inequality. Indeed, I have railed on these very pages about the injustice and violence perpetrated against the unborn, a people who are truly voiceless and oppressed. But more than any other country before it, the United States has sought to overcome and address these problems and, whatever its flaws, it remains the world’s best option to live in freedom.

Colin Kaepernick is no victim and he’s not anti-establishment. On the contrary, he is an exploiter and the face of the new bully establishment.

The judges at the Bull Evaluation Center say Kaepernick is full of bull.

Hall of Fame NFL star Deion Sanders has been known to offer advice to his son, Deion Sanders, Jr., on Twitter. Recently, the elder Sanders had a teachable moment with his son when the latter tweeted: 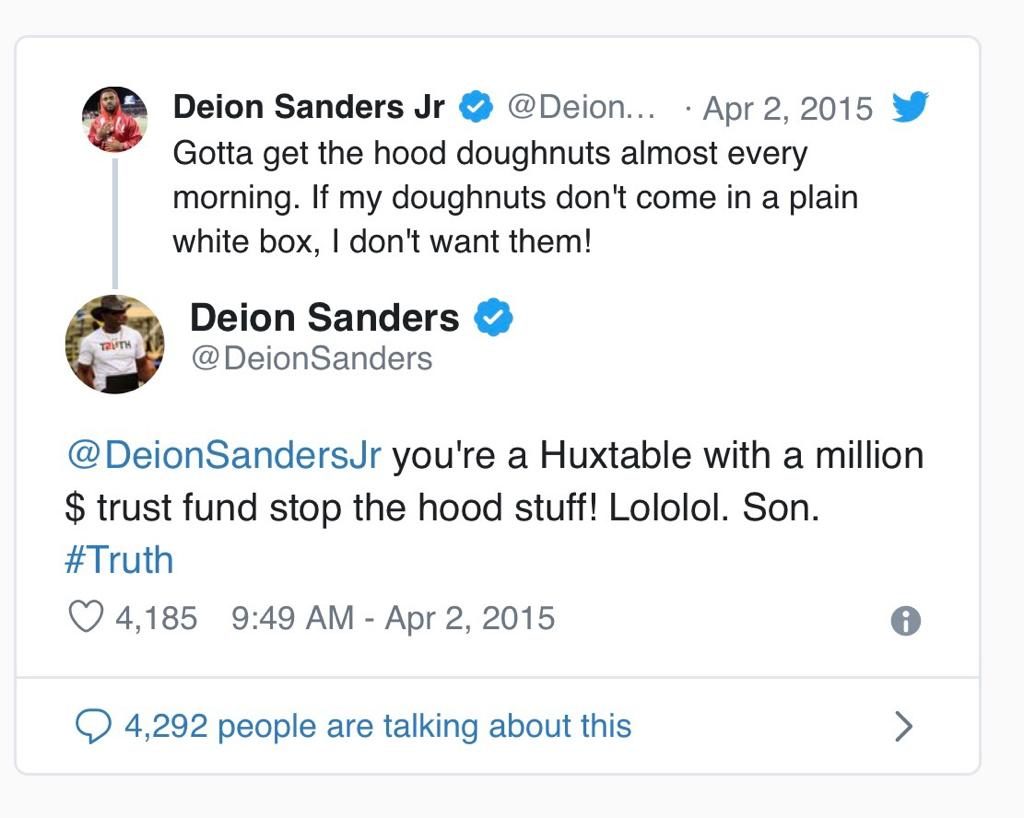 Kaepernick would do well to heed this same advice.

Larry Alex Taunton is an author, cultural commentator, and freelance columnist contributing to USA TODAY, Fox News, First Things, The Atlantic, CNN, and The American Spectator.  In addition to being a frequent radio and television guest, he is also the author of The Grace  Effect and The Gospel Coalition Arts and Culture Book of the Year, The Faith of Christopher Hitchens. You can subscribe to his blog at larryalextaunton.com.
Categories: The Bull Evaluation CenterThe Full Fathom Five Blog
Tags: Colin KaepernickcorruptionLarry Alex TauntonLarry TauntonMoneyNFLNikePolitical GainPublic LightSocial InjusticeSocial JusticeVictimhood

Our next Latimer House Luncheon will be Thursday, May 19th from 11:30-12:30 at Metro Church of God in Birmingham. It will feature Fixed Point Foundation executive director Larry Alex Taunton. The topic: Karl Marx and Jesus Read more…

https://www.youtube.com/watch?v=o1R4Jgs_KiY&t=2s The Taunton boys offer their perspective. Larry Alex Taunton is the Executive Director of the Fixed Point Foundation and a freelance columnist contributing to USA Today, Fox News, First Things, The Atlantic, CNN, Daily Caller, and The American Spectator. He is also the author of The Grace Effect, The Gospel Coalition Book Read more…

https://www.youtube.com/watch?v=42_-TLPRqVA Dr. Jay Smith has been taking on radical Muslims for thirty years. He shares his wisdom and experiences in Africa and London. Larry Alex Taunton is the Executive Director of the Fixed Point Foundation and a freelance columnist contributing Read more…