Bill Kristol. Editor-at-large of The Bulwark: Mercenary for Hire

Kristol is the only non-Christian on our list. Of Jewish descent—I do not know if he is an observant Jew or not—Kristol made his name as the founder and editor of The Weekly Standard and as a Fox News commentator.

In collaborating with the conquering Nazi regime, Marshal Philippe Pétain justified his actions by saying that he was saving lives. Bill Kristol takes the same approach:

You know why Biden mandated the vaccine? To save lives.

Kristol is not this stupid even if he is this intellectually dishonest. For most conservatives, it isn’t about Jenny McCarthy-esque anti-vaxxerism. It is about what such government mandates portend: a shoehorn into a China-style social credit system. But Kristol knows that and chose to ignore it for the sake of a condescending rhetorical jab and a backslap at the press club.

He comes off like Harry Ellis in Die Hard:

“Hey, John, I think you can get with the program a little, huh? Now tell these guys where the detonators are so no one else gets hurt. You know I’m putting my life on the line for you, pal.”

Seeking fellowship among the cultural Hans Grubers who are hellbent on the destruction of America as we know it, Kristol is sure that the hostages are the real problem. Take this smug tweet aimed at Newmax host Steve Cortes on the issue of Muslim immigration:

It’s interesting the host speaks directly to men, who are taken to be responsible for their wives and daughters. He doesn’t address his women viewers directly. So much of the self-image of men on the Right depends on the conceit they’re manly men protecting their little women. https://t.co/BEMhhEQ2zV

I am totally unsurprised that @BillKristol mocks the reality that, yes, men are responsible to protect their wives and daughters.

In fact, it’s a foundational obligation of husbands and fathers, something embraced by any thinking, caring, and authentic man. https://t.co/X2MV719nLT

Perhaps Kristol prides himself on assuming no responsibility for the women in his life. I’m sure they appreciate his ideological commitment to their self-defense. But many of us take such responsibility seriously, and to the relief of the women in our lives who understand that the biological differences between men and women are real and can manifest themselves with frightening consequences. 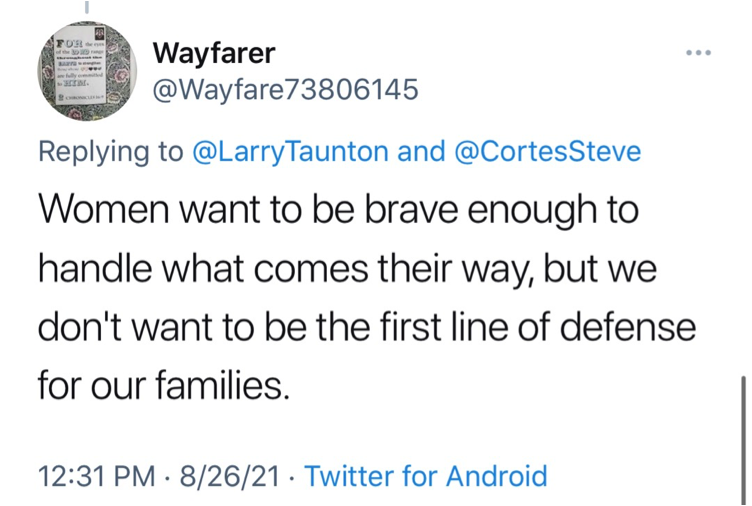 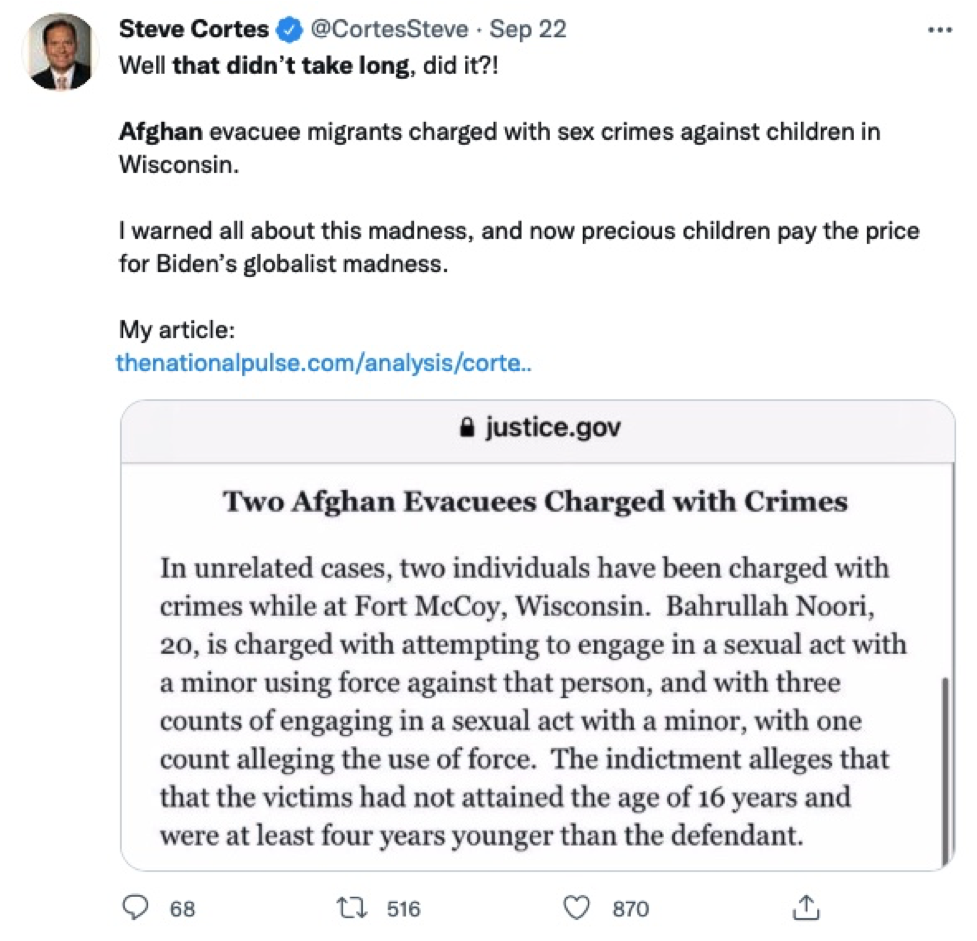 Besides, Cortes was right. The connection between Muslim men and the rape of Western women has been well-established. Doubt it? I point you to the Rotherham scandal where British girls were raped by Muslim men on an “industrial scale.” Yes, between 1997-2013, no less than 1,400 British girls were raped by Muslim men in Rotherham alone. And that isn’t all. It continues. In 2019, it is estimated that some 19,000 British girls were “groomed” in similar circumstances. Melanie Phillips of The Times (of London), which broke the story, told me personally that political correctness of the type Kristol now champions is precisely what permitted these sex gangs to operate undetected—no, unreported—as potential whistleblowers feared they would be labeled racist.

But no worries, ladies. The valiant Bill Kristol has your back: 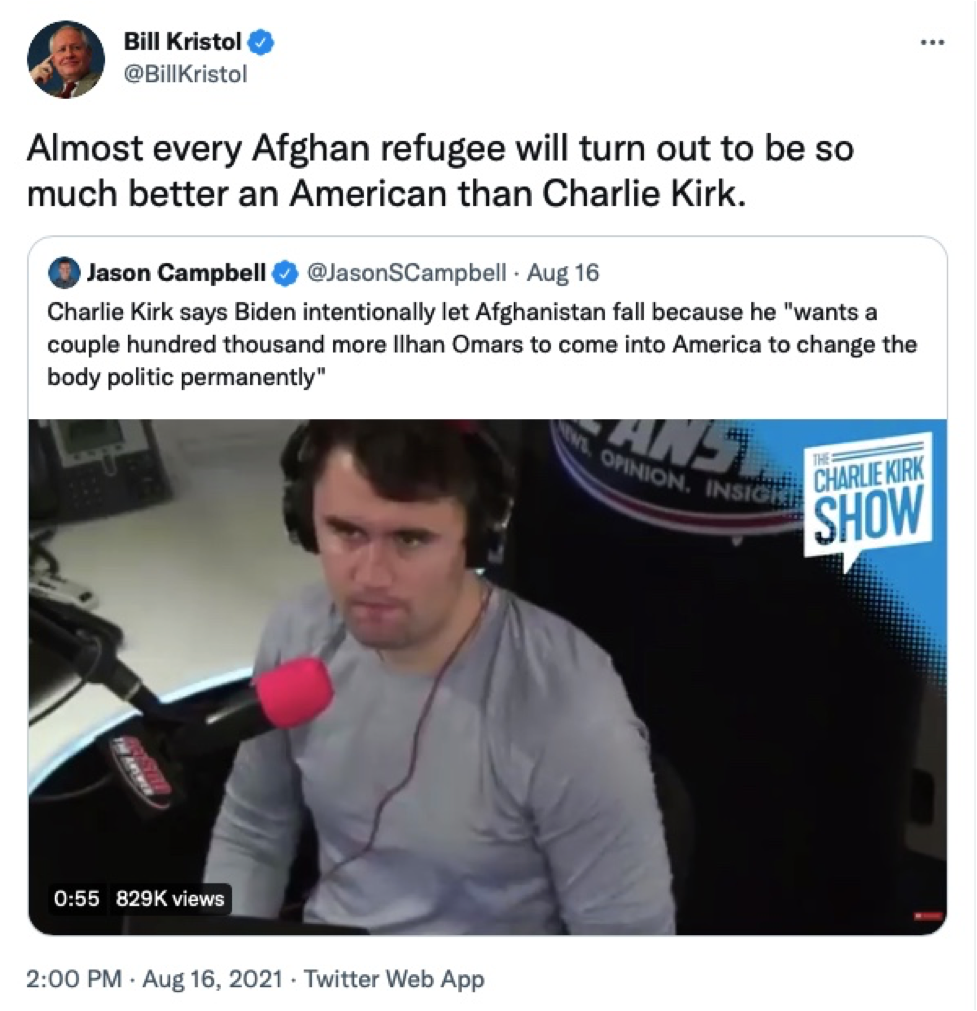 I’ve heard some talk of a man giving his soul for the whole world, but to give it to find favor with the champagne-sipping elitists? That’s a new one.

Bill Kristol. Editor-at-large of The Bulwark: Mercenary for Hire